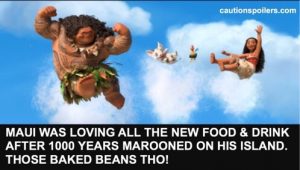 Moana sounds like a hyper realistic British TV spin-off about a barmaid from world’s most depressing soap “Eastenders” doesn’t it, but no – it’s Mo-Anna (though the Anna bit is pronounced in that weird Anna-from-Frozen way which sounds like Ah-Nah and leaves us Brits going “It’s short A followed by Na you fools!”)

Moana is about finding out who you are meant to be, and Moana herself is a very modern Disney heroine. There’s no love story. She’s feisty, learning to sail on the job, and takes on villagers, a lava monster, a boatload of killer pirate coconuts and Maui – a self-obsessed shape-shifting demigod with attachment issues.

The songs are fabulous (as they should be – Lin-Manuel Miranda is one of the songwriters on the film), particularly “You’re Welcome” – a several-minutes long, passive aggressive stealth boast by Maui listing all his achievements for humanity. “How Far I’ll Go”, sung by Moana herself, is delightful and is surely the Let It Go of the film soundtrack.

The story begins 1000 years earlier with Maui literally stealing the heart of goddess Te Fiti to give to the world, so everyone will like him more (Maui was rejected by his parents and since then he’s been massively overcompensating by giving the human race incredible gifts to make them like him. Honestly Moana is worse than Carrie for bringing up awful childhood memories). The stone heart has the power to give life, but it and Maui’s magical fishhook are lost to the ocean. Maui himself disappears into the mists of time though he is spoken of in legends for years to come.

Fast forward 10 centuries and Moana, daughter of a chief, lives on a Polynesian island. Her village is her world – in fact it is everyone’s world as no one ever ventures beyond the reef to fish or to explore. However Moana is destined for better things and as a toddler the sea shows she is the chosen one by giving her Te Fiti’s stone heart.

But one day the coconuts they harvest are found to be diseased, and later still the huge shoals of fish stop coming into the lagoon. Moana begs her father to go beyond the reef to fish but he won’t hear of it. Moana’s grandmother Tala takes her to a cave full of canoes and boats, proving that her people used to be sea-going explorers and travellers. As her grandmother lies dying, Moana  – with Tala’s blessing – takes a canoe and heads out into the ocean to return the heart and save the island.

Luckily, Moana, who has never sailed beyond the reef before, isn’t alone – no, she has the world’s stupidest chicken, HeiHei, for company. (My 7 year old adored HeiHei and considered him the highlight – or should that be HeiHei-light – of the film. HeiHei is so dumb though that I was constantly expecting a Wilson-the-basketball-from-Castaway moment with HeiHei last seen bobbing off across the ocean, but – and this is a spoiler you need to know about if you have small children – HEIHEI LIVES).

A storm blows up and Moana finds herself the next morning shipwrecked on a desert island, which turns out to be the home of Maui. He shuts Moana in a cave so he can steal her boat but she escapes and makes it back onto her canoe. Whenever he chucks her off into the sea, a wave brings her back and deposits her onto the boat.

Moana is determined to returns the heart to the goddess but first they have to battle murderous pirate coconuts, and retrieve Maui’s legendary fishhook which is being guarded by a giant blinged-up crab.

Maui’s tattoos – which move around his body at will and will happily answer back to him when they think he’s making a mistake (which is often, Maui’s 1000 years of solitude do not seem to have brought him much wisdom) – are great fun. (Moving tattoos would probably be a huge hit in real life, imagine being able to take that giant spiderweb tatt you got across your scalp back when you were a daft 18 year old with hair and be able to tuck it under your shirtsleeves during an important job interview).

The section when they visit sparkle-loving giant crab Tomatoa to steal back Maui’s fishhook just doesn’t really fit. Despite the glitter the scenes are quite dull, and drag the film down a bit. But apart from that, Moana is a lovely film – the animation is good, and I particularly loved the waves constantly rescuing her from the ocean and putting her back on the boat. The fiery lava monster Te Ka is particularly, and indeed literally, “well done”. Children will find the film very funny – my son loved the accidental shape-shifting and falling over as Maui got used to his rescued fish hook once again. All in all, Moana is a worthy without being worthy addition to the Disney heroine roster.