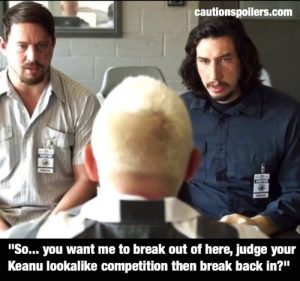 It turns out that “You sucked my arm off!” isn’t some weird sexual practice I should already know about – though apparently Rihanna’s Umbrella is a code word for her vagina. There are lots of codes in Logan Lucky. Codes for different stages of their planned robbery, for a jail riot, and during a mining accident.

And most importantly Cauliflower, the codeword Jimmy used with his brother Clyde in their younger, less law-abiding days, and which he uses once again when he realises that they’re going to have to help themselves in more ways than one if they want security for their family.

Director Steven Soderbergh is back after a shortish self-imposed film hiatus with this comedy heist movie. I should probably call it a caper, though too much is at stake and the main characters too likeable to reduce it to that.

John Denver has been having quite the film year, with my two favourite Denver songs (actually I only know two, but they’re the best ones) regularly popping up on screen. Annie’s Song was in Free Fire and Okja; and Take Me Home, Country Roads has appeared in Alien Covenant and now Logan Lucky. It’s Jimmy Logan’s favourite song – partly because of the story behind it, with two of its creators never having set foot in West Virginia before writing it. Jimmy and his brother Clyde have interesting stories as well, even if they look like your average blue collar guys working hard but getting nowhere.

The West Virginian Logan brothers seem the very opposite of lucky. Jimmy Logan (Channing Tatum, solidly determined but very touching as a newly redundant miner and divorced dad), should have been able to use his talents as a footballer as a route out, but a high school injury has put paid to that. His brother Clyde (Adam Driver) did two military tours of Iraq, losing half his arm in the second.

It comes across as a proud state. Jimmy won’t even let his rich ex-wife (Katie Holmes in sprayed-on jeans and big hair) pay for his cut off cell phone, and schoolfriend Sylvia (Katherine Waterston) travels from town to town in a truck delivering charitable healthcare without ever mentioning charity to its recipients.

The Logans are seen in their community as stupid though I’m not sure why. Unless it’s to let their accusers blame the brothers’ misfortunes on the boys themselves and therefore not something imposed on everyone by an elite. They don’t seem stupid to me and even before their meticulously planned heist, everything they do from pouring a drink at the bar to fixing a car is done with diligence and finesse.

Jimmy’s daughter Sadie (a delightful Farrah Mackenzie) loves her dad and loves taking part in beauty pageants, so she already knows all the words to Take Me Home, Country Roads, and every tool needed to fix a car or herself. In one memorable scene her father fake tans her for an event in the bodyshop using a paint sprayer, and her mother is already making her count calories because, as Sadie mentions with great unconcern, “nobody loves a fat girl!”

With only one hand, Clyde has also had to rein in any dreams he may have had and now works in a bar. Their sister Mellie (Riley Keough) is a hairdresser. Super-glam behind the hairdresser’s chair and super-fast behind the wheel, Mellie is also a top-notch multitasker who aims to get Sadie to her big pageant, rob the Speedway, and return to watch her niece perform that Rihanna classic without breaking a sweat or a nail.

Jimmy’s plan, mapped out on a fridge door robbers’ to-do list and a model made of empty packets, is audacious – have Clyde sent to prison, the same one where renowned explosives expert Joe Bang (Daniel Craig, looking like a cross between Jean Paul Gaultier and a giant humbug) is “in-car-cer-ated”. On heist day the two men are going to escape, commit the crime, then break back in to the prison without being noticed. Their crime scene is the Charlotte Motor Speedway stadium, where Jimmy previously worked underground, which means he has inside knowledge of the air propelled system that on race days moves vast amounts of cash from the concession stands to the vault.

The success of the robbery needs meticulous planning but it also requires a large supporting cast of people with nothing better to do. Joe insists his incredibly dumb brothers are included. And fellow cons stage a fake mini riot to distract attention. Their demands during their cafeteria stand-off mostly relate to getting new Game of Thrones novels for the prison library, and result in a desperate plea from the warden that “the series has jumped ahead and is no longer following the books!”

The banter between both sets of siblings is mostly delightful. It’s not exactly quickfire – the slow southern drawl sees to that. But their conversations still fit together like jigsaw pieces.

There are many sparkling performances so it’s hard to say any shine brightest. Joe Bang, making bombs out of gummy bears and bleach, is wonderfully funny and should steal every scene – but the four Logans (Jimmy, Clyde, Mellie and Sadie) are so affecting and their characters so deftly drawn that Craig never overwhelms them.

But I wasn’t sure whether to be relieved or angry to find out that the sole British character, businessman Max Chilblain, is played by American Seth MacFarlane. Over the top and unnecessary, he’s an American’s idea of what an irritating Brit should be, when we have so many genuine ones of our own that could be used.

Speedway driver Dayton White is also rather pointless and his “my body is a computer operating system” claim isn’t even weird enough to be satirical (not where I live, anyway). Hilary Swank pops up near the end as an FBI agent and again doesn’t seem to need to be there, though she’s always watchable.

There is definitely something joyous about watching a well-planned crime carried out, by criminals that we like. Logan Lucky doesn’t say anything new but it has genuine joy de vivre. After a start that drags slightly, once it gets going the pace never flags and the story is propelled along so well it seems free-wheeling, when its necessarily tight plotting means it is anything but.

buy / rent Logan Lucky on amazon video or buy on dvd, blu-ray or 4k from amazon.com