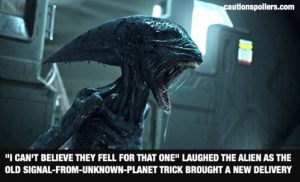 A Covenant is an agreement between god and his people but Alien Covenant is so heady with religion I’m surprised they didn’t go the whole way and call it Alien: Old Testament.

The question is who is god here – Weyland, David, the Engineers, or Ridley Scott himself who has clearly hugely enjoyed drenching his movie with so much creation and destruction, it drips from almost every frame. Scenes of Eden, dialogue that constantly references hell, deities, creation, souls and the devil, and even poetry (start reading up on your English romantic poets right now), and of course Wagner. It’s symbolic of course, with The Entry Of The Gods Into Valhalla.

The irony is that space travel relies on science and rationality but what are colonists doing but creating new worlds? And humans playing god always succumb to hubris either trying to replicate themselves or creating something more perfect which will inevitably be more powerful than them.

In Alien: Covenant god is everywhere but then when you need him, nowhere. The film starts with the android David (Michael Fassbender) and Weyland (Guy Pearce) shortly after David’s creation. Already David is unsatisfied at his position in the pecking order and pointedly mentioning that he won’t die but his creator and father Weyland will. And if there’s one thing scarier than a human with a god complex it’s an android with a god complex (in fact David’s behaviour is the reason for modifications to later synthetics as David has “disturbed people”). Eventually Weyland has to regain control by forcing David to pour the tea (or as we say in the UK, be mother).

The Covenant in question is a colony ship with a cargo of thousands of people and embryos en route to their new planet. The crew are nearly all couples and it turns out that’s not such a great idea as when people’s loved ones are in danger, rules are broken and panic sets in. Luckily there’s another android on board, Walter (Michael Fassbender again), a David-with-improvements, and everyone knows androids don’t fall in love.

After a solar flare wakes the crew from their seven-year sleep too early, there’s a near-instant tragedy, so already it’s a crew cracked by grief, their reasoning slightly off-kilter. Though at least that makes their subsequent bad calls more realistic. And then they receive a signal from a nearly planet – a planet to die for, an Eden – that seems so perfect it could almost have been designed for human habitation. The signal is garbled but eventually unpacked as Take Me Home, Country Roads (John Denver is certainly having a good year film-wise – first “Free Fire”, and now this). The captain, Oram (Billy Crudup), wants to change course to the planet instead of heading on to their new colony and no one wants to go back in the sleep pods after their dangerous early waking.

Daniels (Katherine Waterston) tries to reason with him. It all seems too good to be true, but she’s overruled. The planet looks lush but it is a silent Eden: “You hear that? No birds. No animals. Nothing”. (The crew also don’t mind a bit of littering so if you ever wind up on a seemingly perfect but eerily quiet planet and you find a cigarette butt, get the hell out.)

And who do they find in Eden but David. Now restored to full size and apparently going through his Iggy Pop phase, he’s a menacing presence and leaves one looking back with nostalgia to those relatively carefree days when he was just a head in a man-bag dangling from Elizabeth Shaw’s arm as they sought to track the Engineers to their home planet. As David says “idle hands are the devil’s workshop” and he’s spent the decade studying and splicing like a mad alien-whisperer Nazi scientist.

The attacks when they come are swift and vicious. There are lots of deaths and lots of aliens in this film – protomorphs created from endless experiments, patiently carried out. From facehuggers to scuttling mini aliens, to humanoids and what looks like your typical Ripley-era xenomorph. And the infections work pretty fast – no long waits before your skin start pulsating and your body is cast off like a cheap bloodied suit after a Saturday night brawl.

The characters are likeable but they are lightly drawn so it’s hard to really care who dies, despite all the references to marriage between the couples. There is a very low key gay couple, though the death of one of them brings out the most heartfelt response of the film from his partner. The least realistic character is Oram, the captain – he claims to use consideration and rationality but at the same time is a man of faith, faith which apparently this makes people mistrust him.

And although Daniels is the kick-ass heroine (impressive both in action sequences and as a voice of reason) the relationship between David and Walter – even though they’re not actually on screen together that much – takes over everything. The scenes between these two synthetics are extraordinary – David is terribly clipped and English, your typical movie bad guy, while Walter comes across as an all American hero.

The mood and look of Alien: Covenant is darkly Promethean with plenty of dank, dripping tunnels. That film was criticised for leaving too many unanswered questions (I didn’t feel that myself, though having small children I long ago gave up waiting for any sensible answer to my queries so maybe I’ve just learnt to live with uncertainly) and Alien: Covenant provides a bit more back story. There are male and female Engineers (good to know there are more women in STEM even if we have to go to other planets to find them and they want to kill us) and the life cycle of the aliens made more sense. But mainly Alien: Covenant answers what is happening in Alien: Covenant, actually not such an easy task when it is also retro-fitting so we can get to Ripley in 18 years’ time.

And when Alien: Covenant isn’t talking about gods and monsters (or gods as monsters) it’s all about sex. There’s a sexy shower scene, and some very unsubtle facehuggers birthing from the opening pods which have always been known in this house as “vagina vases”.

Alien Covenant isn’t a perfect movie. It’s always hard in an ongoing franchise to balance the need for novelty while paying due respect to its history (or in this case its future). The new film delivers scares but as it is reflecting films we know well – Prometheus before it (there’s a fabulous scene where David is playing the music from the earlier film on his recorder) and the alien films later on (how many times can an alien sneak on board? They’re massive!) – it does seem derivative. It also rather lacks tension, and you’ll spot the ending a mile off.

But what gives the film its oomph is the relationship between David and Walter. The good twin / evil twin trope is age old but presenting identical characters as good or evil when as androids they aren’t supposed to have free will is the kind of mind-fuckery that modern science fiction needs to give us, to stop it looking so tired.