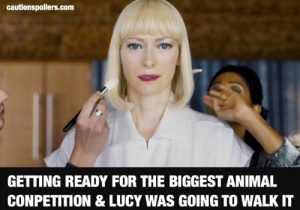 “I know we all know that Grandpa Mirando was a terrible man… We know these walls are stained with the blood of fine working men, but today I am reclaiming this space to tell you a beautiful story!”

And so begins Lucy Mirando’s attempt to create a myth not about her family’s past, which she is upfront about – after all, her bluntness creates clear blue water between the old ways and the new – but about herself, and her business methods. Lucy (Tilda Swinton) is CEO of Mirando Corporation, a previously hated family business, and is rebranding it as a lovable company that is eco-friendly, GM-free and grows adorable giant pigs.

All pigs are clever, and if they were pretty too we probably wouldn’t eat them. Okja – and yes I discovered that I’d been mispronouncing that name, if not all of my life, then at least since this year’s Cannes Film Festival – is about an international fight over a super-clever-super-pig.

The Mirando Corporation has bred 26 superpiglets in their bid to develop a cheap source of food. Lucy genuinely seems to believe in her ideals and that she is a better person than her predecessors, not just her father but her hard-as-nails twin sister Nancy. But she is as economical with the truth, to herself and to others, as her pork-loving customers are likely to be with their food budgets.

Her porcine stars may leave a minimal footprint and use less feed, but as Lucy makes clear the project is ultimately about creating a giant pig that can be completely utilised for food (“all edible except the squeal” as ex-CEO Nancy puts it) and so “most importantly they need to taste fucking good”.

The piglets have been raised by farmers round the world, with orphan teenager Mija (Ahn Seo-hyun) bringing up her beloved pig Okja with her grandfather in the lush South Korean countryside. Okja is delightful and also extremely helpful, creating such a huge splash by jumping in one of the clear pools that fish are thrown up onto the rocks for Mija to collect; and her incredible poo technique is later used to good effect as an ecologically friendly rapid-fire defence system. She’s also got “one big giant nipple” as Mirando employee Jennifer (Shirley Henderson) later points out, which sounds like the winner of Britain’s Got Talent 2050.

Once the pigs are 10 years old, TV star Dr Johnny Wilcox (Jake Gyllenhaal) is to judge a Superpig Pageant with the winner travelling to New York. Unfortunately Johnny is not nearly as successful as he was when the decade-long plan was devised and is now a washed up drunk, though retaining those diva-like demands that seem to become more pronounced in stars the further they fall from grace.

But the Animal Liberation Front (ALF) are on the Corporation’s presumably cute and curly tail, aiming to get video evidence about what it is really up to with Okja and the other pigs. And when Mirando takes Okja, first to Seoul and then New York, the ALF attempt a pig-napping. They claim to be non-violent and they are certainly committed (member Silver won’t even eat a tomato, so desperate is he to reduce his planetary footprint) but when it suits ALF leader Jay (Paul Dano) he does what he feels he has to do.

Unfortunately they are up against Lucy Mirando, who knows a publicity coup when she sees one, and Lucy makes sure Mija is brought to New York too. “She’s young, she’s pretty, she’s female, she’s eco-friendly, and she’s GLOBAL!” says the CEO about the young girl.

The film, though simplistic in its moralising, is rather wonderful, being both funny and sad – but it’s about as subtle as, well, a giant farting pig. The comedy tends towards the slapstick with scenes that are almost cartoonish as teams of cops push against a door only for it to give way and them all to fall in a heap.

Many characters are over the top (sometimes too much so) though their back stories offer some reasons for this; as Lucy, Johnny, and even ALF leader Jay are desperately trying to convince themselves their ends justify the means.

The ALF have more than a hint of idealistic student about them. Not that there’s anything wrong with being an idealistic student, I used to be one myself, back in the 1840s, but the intensity of their empathy means that at times they seem blinded by sentimentality which doesn’t actually help animals in the long run.

I loved the movie’s conceit, whether deliberate or not, of repeating incidents from previous films. Tilda Swinton has previously played identical twins (in Hail Caesar!), and John Denver’s “Annie’s Song” gets its second cinematic outing this year, after Ben Wheatley’s Free Fire (though its use here during a chaotic shopping mall chase is much more fitting).

Tilda Swinton is fabulous as Lucy, a deluded narcissist with the perfect blonde bob, braces on her teeth, and a childhood chip on her shoulder. Ahn Seo-hyun who plays Mija is wonderful. Far more mature than Lucy, Mija is a calm, thoughtful child whose quiet demeanour makes her appear passive though she is anything but. Gyllenhaal as Dr Johnny is a misfire though, as he is both underused and too over the top; and most of the ALF unit members are underwritten.

Guilt and innocence marble the film like fat in a prime cut. The ALF are morally superior to Mirando (although the reality is more complex than that), but there’s a lot of twisting the meanings of words on both sides. And with both organisations believing their own myth, it’s clear that Okja and Mija are the most emotionally intelligent creatures here. Moral frameworks are moulded to show the adults in the best light while requiring minimum sacrifice. As Dr Johnny says about testing the supermeat quality: “of course I’m not going to eat any. We have tasters for that!”

After so much noise and occasional chaos the last scenes are both a somewhat clunky allegory about the othering of communities through treating them as an amorphous mass rather than as intelligent individuals with families, and an unbearably moving ending which really couldn’t have gone any other way.

Okja is available to watch on Netflix.