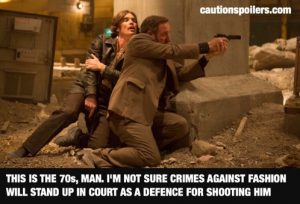 If you like the idea of half an hour of sniping followed by an hour of, well, sniping in a 1970s Boston warehouse, then Free Fire is the movie for you.

Two groups (IRA weapons buyers, and an arms dealer and his associates) come to blows when handing over on a gun deal. And while there are loads of guns around, everyone appears to be a really, really bad shot.

Okay not really bad, once they start shooting everyone seems to get shot, but there’s still an hour left to go at that point and hardly anyone dies for ages. Intermediary Ord talks soothingly of “the golden hour and a half” before a bullet wound kills.

Ben Wheatley’s latest is a frenetic fire-fest with the gags ricocheting around the old umbrella factory as fast the bullets. The best way to describe it is a gangland romp – it’s hugely enjoyable, the ensemble cast hilariously brittle, though they’re not that engaging and I didn’t care who ‘won’. Biting and snarking, their characters are in theory bound to each other but are all really out for themselves.

I am the least co-ordinated person I know. and I’ve always assumed that the only way I could kill anyone with a gun is if a bullet of mine slightly grazed their big toe and they died of septicaemia combined with embarrassment several weeks later. I’ve also always assumed – well, since I saw John Wick – that anyone else would always manage to get a kill with their first and probably only bullet.

Free Fire‘s shooters have a success rate much like mine when it comes to gun deaths, despite having access to endless bullets, though it turns out that is actually normal.

The film is based on news reports of a genuine 1970s warehouse shootout where, because of the types of guns used and the way bullets work, everyone got injured but not fatally. And it certainly adds to the movie that they are still coherent enough to wisecrack their way through – and made me sad when they actually started dying. I will, after all, forgive most things for a good joke.

Everyone’s there for a reason and some are more enigmatic about their motivations than others. “IIIFM” says no-nonsense fixer Justine (a terrific Brie Larson): “I’m In It For Myself”, though this doesn’t stop everyone calling her bird or doll. Ord (Armie Hammer, so stylish in his suit jacket and black polo neck I like to think he started every wisecrack by twiddling a cuff button, though I could have imagined that) her counterpart on the arms dealer side, seems to be genuinely enjoying the fight. “Now we’re cookin’!” he shouts in delight as bullets fly.

Two IRA men, Chris (Cillian Murphy) and Frank (Michael Smiley), are there to take ownership of a consignment of guns and have a briefcase full of cash to hand over, as soon as possible.

Stevo (Sam Riley) and Bernie (Enzo Cilenti) are there as added muscle. Stevo is young and volatile, and frankly it’s no surprise that he’s the catalyst for the whole thing kicking off shortly after.

South African Vernon (Sharlto Copley) is the arms dealer, loud and brash in wide-lapelled salmon pink and powder blue polyester. He and one of his associates, Martin (Babou Ceesay), have the best introductions I’ve heard on film in a long time: “Vernon” says Justine, “…was misdiagnosed as a child genius. He’s never gotten over it” while Martin “was a Panther but it didn’t work out”.

Even before the fire fight starts, many of the protagonists are snarky, goady and bristly; and although others attempt to smooth things over so they can get the deal done and get out, it’s obvious that the process isn’t going according to plan. (“WILL EVERYBODY CALM THE FUCK DOWN” shrieks Justine when people are refusing to calm the fuck down.)

Hiding behind pillars and general warehouse detritus, the case of money lying in full view, the wisecracks are interspersed with swearing at each other as they try to balance self-preservation with ruthless self-enrichment.

Despite the focus on the shootings there is a rather nice flirtation between Irish Chris and cool Justine, with a will they/won’t they dinner invitation hanging in the air between them throughout.

The violence never seems cartoonish; because, rather than despite, the fact that people get injured but live. (For a while anyway – there are a couple of really gruesome deaths and at least one injury that I really wished had killed the victim outright so I wouldn’t need to look at it again.)

There’s a jarring note when Vernon says “take a chill pill” which I think originates in the 1980s though no doubt someone will be along shortly to tell me that it came over from England with the Pilgrim Fathers.

The cacophony of this gun battle with its combination of bangs, yells and wisecracks is a comedy death-wall of sound, albeit one that is softened slightly by John Denver’s Annie’s Song which occasionally offers an anachronistic if rather soothing interlude.

And the setting – that old umbrella factory manages to look both light and dark, massively empty and cluttered, all at the same time.

Sadly the movie also feels both empty and cluttered on occasion and there were times when I had no idea who was shooting at whom. To be fair this is addressed in the film: “I forgot whose side I’m on!” shouts one character. And as I wasn’t that concerned who won, it didn’t really matter.

The wisecracks are red-hot though, and just keep coming; from behind pillars, or van doors, even as the joker’s life blood is leaking away. And that’s the way I want to go. Not from several gunshot wounds obviously, but in on point pastel fashion with a joke on my lips and a case full of money almost, almost within my grasp, a microcosm of my life.

Free Fire is a golden hour and a half, if a slightly tarnished one. And I am absolutely not going to spoiler it for you and tell you whether Justine and Chris ever get that dinner date.