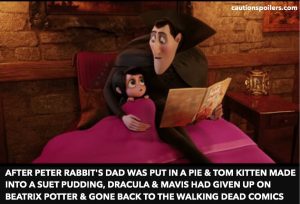 Actually I’d happily take these criteria for any movie, whichever age group it’s aimed at. But Hotel Transylvania – the animated kids’ movie about a hotel where harmless, forward-thinking monsters can visit to escape the predations of mean old humans – has fart jokes, witches on broomsticks vacuuming up the farts, and an invisible man gag where he powder-puffs his bottom, so it’s already off to a head start before we even factor in the 92 minutes running time and the nice happy ending.

In this reverse take on the familiar creatures-of-the-night tale, Dracula (voiced by Adam Sandler but looking like Vinnie Jones in a cape) has built a spooky castle which he runs as a hotel for all kinds of monsters, to protect them from the persecution of humans. Dracula’s wife’s death by human hand over 100 years before has left the Count bringing up his daughter Mavis (Selena Gomez) alone, and he is desperate to protect her from what he sees as the scary and dangerous world outside his castle.

Monsters are much more evolved now – Dracula only drinks blood substitute, and he can’t kill a human, even a particularly irritating one, as “that would set monsters back hundreds of years” – but have humans also evolved? He isn’t taking any risks with Mavis’s safety.

Understandably over-protective, Dracula has been putting off his funky stripy-tights wearing daughter’s requests to go out into the world for decades, but now she is officially coming of age at 118 he can’t hold off much longer. Mavis is desperate to see the world particularly “HaWeeWee” (Hawaii). Surprisingly, as Mavis requests yet again to be allowed to explore the world around her, and despite pointing out her teenage “pouty bat face” when she transforms – Dracula agrees that she can go. Delighted, she flies off in bat form into the countryside to the nearest human village.

Once there things do not go according to plan though, as she sees aggressive, lumpen humans stabbing each other in the head with pitchforks then catching fire en masse (to be fair, from my experience it looks like a pretty typical Saturday night out in many English towns to me, but Mavis has led a protected existence for over a century).

Upset and disheartened, Mavis flies home to the castle – whereupon we see that the villagers are zombies and the village a sort of film set with house and shop frontages but nothing behind them. Her father has designed the whole thing to put an end to her wanderlust by making her think that humans are too dangerous and frightening to visit.

As the hotel starts to fill up with monster guests here for Mavis’s birthday party (including Frankenstein’s monster, a huge family of werewolves, various mummies and other ghouls and goblins) there’s a knock at the huge castle door.

Dracula is horrified when a human walks in. Jonathan (Andy Samberg) is a 21 year old college slacker dude, in the area for rock climbing, who has heard about the spooky castle and made it his mission to find it. Ginger haired and irrepressible, he is particularly attached to his giant backpack, which seems to hold only a scooter and a selection of T-shirts so disgustingly stinky even the undead Count complains he can’t breathe when he catches a whiff of one.

Dracula is determined to gt rid of Jonathan but he can’t kill him, and in the end he disguises Jonathan with make up to look like a “Stein”, one of the Frankenstein family.

Mavis and Jonathan get along extremely well, much to Dracula’s chagrin, and the non blood sucking Count is soon trying to erase Jonathan’s memories and send him away. However Jonathan proves that humans are indeed disgusting when his contact lenses prevent the hypnotism from working and we witness him trying to drag his lens across his eyeball (any contact lens wearers like me will know just how much that freaks people out. In fact if you’re ever on a Tinder date that’s going badly, don’t bother going to the loo and climbing out of the window, just tell them you’ve got something in your eye and watch them go grey and slowly sink under the table as you try to extract your contact lens over your starter).

The hotel’s entertainment activities are pretty low key, and it does seem that being a modern monster is actually rather dull. No kidnapping of young virgins as potential undead wife material, no tearing Americans limb from limb on the Yorkshire moors as you howl at the silvery moon, no terrifying the locals as you stagger around hoping the giant stitches attaching your head to your shoulders don’t unravel. Instead these once pant-wettingly scary fiends play bingo with talking skulls picking the numbers, and enjoy relaxing spa treatments. Any over-indulgence takes place not in a coffin-strewn cellar with chained skeletons hanging from the walls but at the all-you-can-eat buffet where the guests pile plates high with cockroaches, mouse jelly and of course that truly terrifying Hollywood staple, the egg white omelette.

Jonathan certainly adds some spark to proceedings, bringing out his scooter along which the guests love, or causing havoc in the pool. But the threat of outing him to the other guests is always present.

I remember watching Keanu Reeves playing Jonathan Harker in Bram Stoker’s Dracula in the early 90s and a more misconstrued bit of casting it is hard to imagine (and I’ve seen Kevin Costner in Robin Hood – Prince of Thieves). This Jonathan, though, is one role that early-career Keanu could have played with aplomb – a laid back slacker boy who just wants to have fun, but who is also unencumbered by preconceptions and sees the best in everyone – as well as falling for “the zing” (his growing love for Mavis).

And does vampire-human true love triumph? of course! I don’t take my little ones, annoyingly spoilt though they are, to the Saturday morning kids’ cinema slot to learn harsh lessons about broken hearts, violent death, and draining people of blood. Hotel Transylvania, like many children’s films (or indeed any film – most movies are a well known story with different protagonists and locations), is a traditional tale of children growing away from their parents and needing to stretch their wings. And the parents discovering good in others when they least expect it.

Read my review of Hotel Transylvania 2.

buy / rent Hotel Transylvania on amazon video, or buy on dvd, blu-ray or 3D from amazon.com