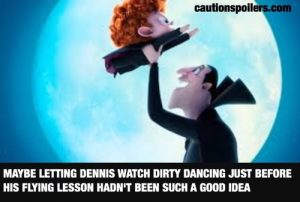 “He’s a late fanger, just like you!” declares terrifying vampire Vlad cheerfully, of his little ginger great grandson Dennis – after various adventures with Drac still haven’t resulted in the boy’s sharp teeth appearing. In fact Dennis has shown no signs of momsterliness at all – and he’s nearly five!

The is he/isn’t he a vampire conundrum, and whether you should ever try to turn someone into something they are not, are what drives this sequel to the 2012 film Hotel Transylvania, the animated comedy about a widowed vampire bringing up his daughter Mavis and learning to let her literally fly away.

Not only are the loved-up couple joined in unholy matrimony, a union that no man nor monster can put asunder, but they’ve also produced a baby, Dennis. (Though known to his rather old school grandpa – or should that be vampa – as Dennisovich.)

On hearing about his daughter’s pregnancy Drac (Adam Sandler) is delighted and pronounces that whatever she has, a human or a vampire, he is happy: “human, monster, unicorn!” he states, it doesn’t matter to him.

But new babies change people. Baby Dennis may be the spitting image of his red-haired California dude dad, but Drac is convinced he’s actually a vampire and is continually looking for signs – signs that just aren’t there.

Not only that, but mum Mavis has become what we all mock when we are pregnant but all turn into, at least a little bit, once our precious little bundles arrive: the overprotective parent. Soon she’s baby-proofing the castle hotel, although it’s probably not a bad thing to install a child gate on dank stone steps that lead down to… well, nothing.

As Dennis grows up, Mavis tries to get him onto a more human sleep schedule, one that doesn’t involve him being woken up at 8pm. Drac is unimpressed by this and also by the human version of the lullabies he used to sing his motherless daughter to help her sleep when she was a child: Why sing Twinkle Twinkle Little Star when you can soothingly croon “suffer, suffer scream in pain; blood is spilling from your brain”?

But this time Mavis relents and lets Dennis wake up for the werewolf cubs’ midnight party. And it brings back happy memories for her, as she remembers playing the flaming limbo game when she was young. But everyone gets overexcited and it ends in disaster, proving to Mavis that they need to think about relocating with Dennis to California, where Johnny grew up.

In the meantime he has human classes to go to, though even here Drac can’t understand why the boy can’t take the classes that are held at the castle – such as monster yoga, which involves being stretched on a rack.

With his grandson possibly leaving him, Drac hatches a cunning plan to train him in monster skills once and for all. Sending Johnny and Mavis off to California so his daughter can check out the area, Drac offers to look after little Dennis. And as soon as the young couple have left, he and his motley assortment of monsters take Dennis on a tour of Drac’s literal childhood haunts to teach him how to become a vampire. “All he needs is time with his vanpa!” he announces.

The journey doesn’t get off to a great start when Drac is dumbfounded by that most complicated of tasks, working out the baby seat. “We just strap our kids down with duct tape!” says Wayne the Werewolf not particularly helpfully, displaying an attitude familiar to nearly every 1970s parent. They finally get Dennis to the Dark Forest, where instead of terrifying everyone, Frank takes a selfie with a couple of female joggers. Not exactly the reaction Drac was looking for.

Meanwhile in California Mavis is stunned and delighted by the choice of potato chips at the Mini Market, and puts Johnny in his place when he tries to mansplain BMX riding to her at the skatepark only for her to whizz off on her bike leaving a trail of fire behind her.

Even the summer camp Drac attended as a child has succumbed to the age of touchy-feelingness. The vampire kids don’t have to catch their own rats any more, and the campfire singalong is about helping each other and sticking together. It’s clear that the new generations of big-toothed bloodsuckers aren’t stretched at all here, either literally or metaphorically. And worse than that, Dennis’s fangs still haven’t appeared.

After an attempt at flying goes disastrously wrong, Mavis is on the warpath – and back at the castle she decides they’re definitely moving out after their son’s fifth birthday party in a few days.

But before she leaves she invites not just Johnny’s family but also Dracula’s aged dad Vlad to Dennis’s party. Vlad is an old fashioned vampire, and turns up with his bat monster Bela, a horrible creature who exudes evil. Vlad is charmed by his great grandson though, and declares that all he needs is a huge fright to finally scare the fangs out.

Hotel Transylvania 2 is funny – not quite as sharp as the first film, though Drac is always entertaining as he tries to straddle worlds old and new. Overall the humour is more in the set up rather than gags – Mavis turning into an overprotective mother, and the summer camp which is now too nurturing of mini monsters.

What made the first film stand out was turning on its head the idea of who is good and who evil, with the monsters the hunted ones and humans the wicked destroyers, hell-bent on hounding these creatures who were simply different. Whereas here the monster, when it finally appears, is a real monster.

But it is reasonably snappy (the film comes in at about 90 minutes) so it never drags, and there’s enough for parents as well as children. Many mums, dads and grandparents will relate to both Mavis’s overprotectiveness and Drac’s worries about Dennis’s development (plus of course his failure to remember just how protective he was of Mavis as she was growing up).

And a message of tolerance is always welcome – Mavis not only berates Johnny’s mother about Dennis: “can we stop using the word ‘normal’?” but also her father: “he is who he is and you can’t change him Dad”.

Check out my review of Hotel Transylvania.

buy / rent Hotel Transylvania 2 on amazon video or buy the dvd, blu-ray or in 3d on amazon uk

buy / rent Hotel Transylvania 2 on amazon video or buy the dvd, blu-ray or in 3d on amazon.com