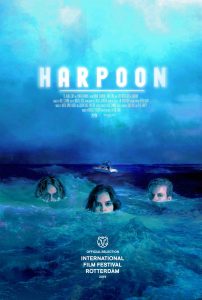 The behaviour of all three characters in Harpoon veer from edgy and fearful to calculated and self-preserving. “Is he edible?” asks rich boy Richie of his friend Jonah, whose arm is going septic as they bob around on a drifting boat, after Richie’s girlfriend Sasha has tried to stop the infected hand poisoning Jonah’s whole body.

To misappropriate 16th century political philosopher Thomas Hobbes’ most famous utterance, Harpoon is “nasty, brutish and short”. But in a good way  – a very good way! And while it’s not a deep dive, chin-stroking treatise, neither is it shallow-end fluff.

And who hasn’t asked themselves the two big life questions: is their partner shagging their best mate, and could they eat someone?

Hobbes wasn’t too impressed with human nature, so I think he’d have thoroughly approved of writer-director Rob Grant’s film. I watched Harpoon in a rather heavy week, movie-wise, sandwiched between Joker and Judy.

It’s certainly a palate-cleanser, this vicious black comedy about love, friendship and the roles we can’t escape. Grant puts three people in a situation where they’re stripped of everything and can no longer hide behind wealth, beauty or a doofus personality.

And, refreshingly, this is is a literal stripping of the boat they’re drifting on, with everything of use thrown overboard in case someone else could use it as a weapon.

Grant, and the film’s narrator (Brett Gelman), gleefully observe events with a dispassionate eye. Characters are not chess pieces; they’re authors of their own destruction. Their behaviour may be familiar enough that most of us might sympathise, but we’ll be planning in our own heads that we be consumer rather than consumable should we ever find ourselves stuck in a broken-down boat, without food or water, and with only really irritating people for company.

Richie (Christopher Grey), Jonah (Munro Chambers) and Sasha (Emily Tyra) are on Richie’s family yacht Naughty Buoy. It’s an already difficult trip as Richie has just accused Sasha and Jonah of sleeping together, and given his best friend a good kicking as punishment into the bargain. The texts he’s using as evidence turn out, so they say, to be about a new harpoon Sasha was buying Richie for his birthday, so it’s time for what they call Even Stevens: Jonah kicking Richie in the balls.

Richie may be fit and muscly but he still has the baby soft skin and rosy sheen of someone well used to the best in life. Jonah is rough and ready, an only child whose parents hated him and who now sit in two urns on his shelf (for now, anyway). Sasha, from a military family, is a nurse who seems an odd girlfriend choice for the wealthy, angry Richie.

The day out is a chance to try out Richie’s new harpoon, but almost instantly jealousy and resentment bubble to the surface. Then the engine stops working. Drifting aimlessly, hours turn into days as starvation and dehydration take effect. By the end anyone who isn’t dead looks like they are. Faces are pasty, lips are beige and cracked, eyes are haunted, and seagull blood starts to look like an acceptable aperitif (before the main course of someone’s arm).

The voiceover gives useful background and clarification, a good move in an 83 minute movie. Dry, drawling and amused at their predicament, the narrator starts by simply describing their roles and friendship types before adding a layer of unease: tales of sailors’ superstitions implicate every one of them in the survival battle to come, a battle that references Edgar Allen Poe and shipwrecked seamen, drawing straws to see who should be eaten.

Bowling along with merciless glee, Harpoon‘s rotting, septic hands, sudden violence and raw bird breakfasts may be the most visceral horror elements but just as interesting are watching the shifting sands of blame and allyship as the two men and one woman argue and bond over past behaviour. And over everything, from Day 5(!), the threat and allure of cannibalism hangs over them.

Like a sick game of pass the parcel, you wonder who will be the chosen one when they reach that point where thirst and hunger get too much but they still have the energy to kill someone.

This is a funny, tense and pitiless ride that never lets up. I had no idea who if anyone would survive, and didn’t really care, though I’ll admit to a preference for red-haired Sasha.

This is the second comedy I’ve seen this year where unpleasant people stuck without rescue consider eating each other; Corporate Animals, about a hideous team-building exercise (well, all team-building exercises are hideous but you know what I mean), sees Demi Moore as a boss trapped in an underground cave system with her underlings, and with little hope of rescue. There’s just something so enjoyable about watching people, often awful to start with, descend to the lowest rung of humanity far quicker than they should.

Once Sasha, Jonah and Richie are out on the open water there are only three locations: below deck in the living quarters, the deck itself and the water. The claustrophobia, of being stuck there with people who hate you, is palpable; there are endless close-ups of degrading, sweaty faces.

Threesomes (not that kind!) are the trickiest of friendships to maintain. Grey, Tyra and Chambers make an excellent trio of frenemies, while playing everything completely straight. Emily Tyra is particularly good as a woman already moving in a milieu she’s not born to, finding out that what she thought she knew has been turned upside down. At her best Sasha is self-possessed and decisive; at her lowest ebb she’s frightened and on edge, though she’s never wilfully nasty.

Everyone has a chance to be victim and a villain, and despite the violence it never feels exploitative. It’s just three players with an equal chance of survival or a horrible death, and us their cheerleaders.

Hugely entertaining, sometimes daft and always compelling, behind Harpoon‘s magnificent surface heartlessness there is much to chew on.

Harpoon is available in the UK on the Arrow Video Channel, Amazon Prime and Apple TV

If you want to know who dies scroll down for spoilers…

Watch on the Arrow Channel on Amazon Prime UK

rent / buy on VOD from amazon.com

Other ways to watch Harpoon in the US

Spoiler: They draw straws for someone to eat, and Sasha loses. Richie is murdered by Jonah (his throat is cut) before she can kill herself. Then it turns out Jonah has the fuse for the ignition, AND has been hoarding biscuits. I don’t know which is worse. Sasha pretends she will go away with him, but once on deck she pushes him and he falls backwards into the water (and onto the propeller, chopping him up). She starts the boat but the force pushes her backwards into the sea, and she has to watch as it chugs off into the distance. Still, she takes it well, all things considered.