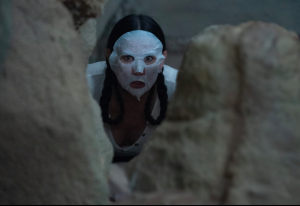 Always wanting to push her employees on to greatness, even if they don’t want to go, Lucy declines the beginner’s trail and instead makes instructor Brandon (Ed Helms) take everyone down the advanced caving route, cajoling and bullying them into compliance.

I’ve always loathed team-building that involves anything more strenuous than a Lake District pub and a shared scampi basket, so I finally feel vindicated about my feelings towards the third worst business trend during my years in the corporate world (Secret Santa was the worst, with 360˚ appraisals a close second).

Lucy’s company Incredible Edibles makes edible cutlery, because the primary threat to the world is plastic knives and forks, rather than businesspeople like Lucy, who treats her staff like the disposable products she loathes, while her company consumes their whole lives.

After crawling through a narrow tunnel on their stomachs –“your panic attack is not authorised” Lucy barks at poor Suzy (Nasim Pedrad) – they finally get to an awe-inspiring central cavern, complete with paintings, stalactites and battery lights. All is well until what Brandon calls a “geological incident” creates a rock fall which buries their entrance tunnel. And Brandon. Though don’t weep for him – he was trying to escape while leaving everyone else behind when it happened.

Will the survivors turn on each other, or finally take Lucy’s instructions to heart and work as team? Some from column A and some from column B, as it happens.

The team are reassuringly human under such pressure, succumbing to hallucinations, doom-related shagging and shouting at each other, which I suppose you could see as Lucy’s three Cs of business: confidence, collaboration and captaincy. You could say that initially, as hours turn into days, office life continues much as before, only now with no working toilets.

After several days in the cavern, nearly everyone is struggling. Though Lucy seems fine, taking an area of the cave for herself where she does her hair in many different styles.

With their food supplies dwindling, attention turns to another available food source: Brandon.

Corporate Animals – with its literal consumption of those it has already killed – is an unsubtle satire of modern business culture, as we witness even the most mild-mannered turning into monsters in order to defeat the biggest monster of all. They have to learn the way of the office monster to kill it; fighting amongst themselves weakens them and makes it stronger.

It does dip in the middle, when everyone is just being awful to each other in a confined space. (God knows I’m getting enough of that with my children at home this half-term.) There’s an animated sequence which feels unnecessary (a talking wound that sings Toxic by Britney Spears works much better and could probably win America’s Got Talent).

Still, you can’t fault the audacity of director Patrick Brice and writer Sam Bain, as they push ideas as far as they can go. And I’d always rather watch a film that pushes the envelope rather than staying snuggled inside it (wait, am I turning into a Lucy?)

It’s also very funny, from the team’s bickering to some of the visual gags (in both senses of the word). I spent a lot of time bouncing between involuntary nervous laughter and involuntary guffawing, as increasingly extreme situations were treated as perfectly normal.

Underground, Lucy’s shortcomings as a leader become even clearer, and it’s former intern Freddy (Karan Soni), and MBA graduate Jess (Jessica Williams), who turn out to be the most determined and innovative.

The sheer gall of Corporate Animals meant that it was only afterwards that I realised that in most cases I couldn’t put my finger on character traits, just actions. That’s partly because it’s illustrating that under such pressure most of us do turn into animals, and partly because the awfulness of Lucy, and the decisions they make, overshadow characterisation.

It reminded me of the more polished but just as blunt Assassination Nation, and while that satire was about America as a whole rather than business, there’s a similar dynamic going on – that things are so awful now, subtlety is no longer an option.

This is a film full of immoral dilemmas, and the biggest of them is not actually whether should they eat Brandon, killed by that initial rockfall. Brandon is, after all, already dead.

Corporate Animals is also a twisted depiction of family life – don’t many people claim their colleagues as their surrogate family, awful or not? Lucy absolutely sees herself as a mother, teaching her children in the ways of the world.

Moore is brilliantly awful, whinging and whining, coercing and threatening, dangling carrots and wielding corporate sticks. Modern office culture can be so toxic that to anyone who has worked for a sociopath she’ll be instantly recognisable.

Entirely lacking in self-awareness, she’s a privileged white woman leeching off other people’s disadvantage. Lucy has already told Jess, who is black, to “listen to the Beyonce inside you”, finishing with an even more cringeworthy “Girlfriend!”. Before they head into the caves she points out that as a 1/64th Acoma Native American, she alone can give permission if anyone wants to touch a cave painting. But she’s a feminist! Thank god she’s not all bad: “if women can’t be as horrible as men what’s fucking feminism for”. Oh.

Still, some creatives may agree with her suggestion that death be a suitable punishment for Gloria (Martha Kelly), whose crime is writing bad poetry which relies on rhyming couplets; though as Lucy only suggested it because she wanted to eat her, I’m unsure whether we as writers can condone it.