You are here: Home / Film Reviews / A Woman’s Life 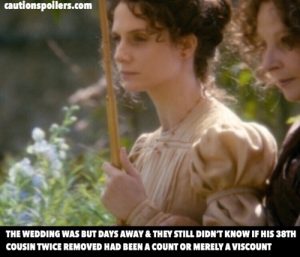 “What good are the flowers if the fruit does not ripen?” asks Jeanne (Judith Chemla) to herself early on, little knowing that this will pretty much sum up her own existence, 30 years hence. A life not even half-lived, yet alone well-lived.

This film from director Stéphane Brizé, based on Guy de Maupassant’s late 19th century novel Une Vie, feels quiet and uneventful but really it is anything but. There’s a soundtrack of intrusive background disturbance – howling winds battering an imposing house, spitting logs on the fire, the rain at the window, a clock ticking, the crunch of boots on gravel. At one point I almost felt I could hear creaking joints as the by now middle-aged Jeanne and her aged father walked in the grounds.

This is a beautifully crafted film which manages to feel entirely different from other period dramas without ever seeming to succumb to gimmickry. It’s helped – driven? – by an increasingly complex performance from Chelma, though hers is a portrayal which is also at times numbingly sad.

We are in Normandy in 1819. Jeanne’s marriage to a vicomte with a more impressive lineage but no fortune, a marriage she guilelessly enters into, is the dividing line: between her happy, carefree days living with her parents and her friend/maid Rosalie (Nina Meurisse), and a descent into misery she cannot prevent.

Julien de Lamare (Swann Arlaud) is new to the area, and after an introduction from the local priest he comes to afternoon tea, where her parents grill him on the minutae of his family tree: “the cousin of your uncle on your mother’s side…”, important when you are of aristocratic lineage but have no hard cash, or even your own estate, which has already been sold to pay paternal gambling debts.

Before she marries, Jeanne plays checkers with her mother Adélaïde (Yolande Moreau) and her father Simon-Jacques (Jean-Pierre Darroussin), and learns to garden, symbolically watering the tiny seedlings she has just planted out.

Afterwards her parents move elsewhere, and she is kept away from Julien’s new friends Lord and Lady de Fourville (Alain Beigel and Clotilde Hesme) because the newlyweds’ coat of arms is not yet painted on their carriage.

Their wedding night is hugely uncomfortable to watch, as he has sex with her while she lies there, her expression moving from worry to distress to endurance. The camera lingers, up close to her face, the lighting dark and gloomy, so all there is to focus on is her shock as she lies trapped beneath his weight. It’s an upsetting mix of intimacy and traumatised acceptance, and probably recognisable to many.

Julien is a combination of tight-fistedness and what would have been called, if he were a woman, loose morals. He looks about 18, an arrogant manboy who takes her money and her best years, offering adultery and interrogation in return.

Her fortune now under his control, all she really has are her female friends, so he sleeps with them too (the sheer bad manners of this almost overwhelms me).

His conquests are always close to home, and when he’s not cuckolding his best friend he’s berating Jeanne for burning too many candles to light the house, or too much wood to warm it, and then kissing away her distress after bullying her to tears.

Even when her parents force an embarrassed Julien to apologise for fathering a child with a servant, they still give him a pass with her mother saying: “Julien spoke very eloquently…”

But they move forward, with their baby Paul, as what else can she do? Eventually, the coat of arms painted on the carriage, Julien and Jeanne can visit his friends the de Fourvilles, Gilberte and George (no, not the artists).

And it’s Julien’s inability to keep his hands off the cheery and chatty Gilberte that leads to the most jarringly shocking event of the film, but one that is genuinely remarkably quiet – as quiet as the rest of the film feels, but isn’t.

It’s when her beloved mama dies that Jeanne discovers the letters – missives filled with love and lust and adoration, sent not from her father but from her mother’s lover. Filled with pleas for a snatched hour here and there, they have the potential to force Jeanne to face up to what real, normal desire and love are, even when illicit, and she burns them all.

Paul grows up with many issues, and his heartrending pleas as he fights his teacher to stay with his mother are long drawn out. The camera doesn’t flinch as Paul struggles, is restrained, recovers, then fights on, desperate to leave. “Be gentle, Paul!” Jeanne admonishes, with ineffectual desperation.

While all those Jane Austen adaptations and last year’s Emily Dickinson biopic A Quiet Passion fizz with a dangerous wit, as intelligent women push against the restrictions of their sex, Jeanne is very passive. Eventually annoyingly so. Which is probably mean of me, bearing in mind her lack of power. (She does temporarily remind me of Katherine in Lady Macbeth, when she momentarily resorts to bullying – both have a little power because of their class, and use it, though Katherine later turns to murder while Jeanne retreats back into herself.)

Things happen to Jeanne, and she often doesn’t even seem to react. She’s also prone to see life as entirely lovely and carefree before marriage, and dour and miserable afterwards. It takes Rosalie to point out that “you see my lady, life is never as good or as bad as you think”.

I’m a sucker for the homely detail of a prettily sprigged muslin dress, and nothing makes me broodier than a baby wrapped in so many layers of lace and satin it looks like a posh pincushion. Despite the family’s relative wealth, A Woman’s Life is all very small scale, with few vistas. Jeanne’s perspective infects everything, even when we are looking at her rather than as her.

The pre-marriage scenes and flashbacks, including her courtship, are happy and colourful, while post-marriage all is dark and gloomy and wet. (In fact as an English lover of drizzle and gales I think our own Jane Austen films should have a lot more of this.)

There’s an inevitability to the chain of out-of-her-control events that make up Jeanne’s life, and her passivity eventually begins to grate. It’s no surprise that any happiness she eventually finds is offered by someone else, rather than her own creation.

And while Jeanne’s womanhood defines her (her position and lack of agency are determined by it), she is also rather like a parcel passed around to people who control her – parents, husband, priest, even Rosalie.

buy / rent a woman’s life on amazon video or buy the dvd or blu-ray from amazon.com