You are here: Home / Film Reviews / A Quiet Passion 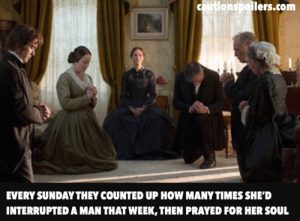 I’ve got so used to period dramas about sharply witty women having intelligent conversations amongst themselves under concealing parasols, that I can’t imagine what would happen if I came across a dreary film all about ballrooms and bonnets.

I’d probably burst my stays from all that bosom-hoiking and I would expect any good Victorian liberal man nearby to let out a supportive harrumph.

A Quiet Passion is, luckily, another gem, where the American poet Emily Dickinson (an absolutely riveting Cynthia Nixon) and her sister Vinnie (a warmly funny Jennifer Ehle) bat bon mots back and forth like a (mostly good natured) high-level tennis match; though it’s wit with a barb, and increasingly an acceptable outlet for anger.

Sometimes they include their delightfully irrepressible and even more delightfully named friend Vryling Buffum (Catherine Bailey, only prevented from upstaging everyone by Nixon’s extraordinary performance), who is never at a loss for words and indeed always ensures she has the last one.

Emily Dickinson had only a handful of poems published during her lifetime. She and her sister lived with their parents all their lives, and though her father’s wealth and relatively forward-thinking approach to his children enabled her to write, society, convention and organised religion kept her constrained, which she always fought against.

Emily and Vinnie’s mother (Joanna Bacon) rarely ventures downstairs. Their father (Keith Carradine) is a typically progressive man of the age, supportive of oppressed groups in some ways but not as many as he thinks (not unlike now, then). He’s anti-slavery, and allows Emily to write, contacting a publisher he knows at The Springfield Republican who might want to print her poems, and prefers his children to be sophisticated rather than docile.

But in other ways he’s a typical patriarch, thinking the stage is an unsuitable place for a woman. There’s a wonderful scene where the family pose for individual photographic portraits, which then gradually morph into their older selves. He remains a dour, bewhiskered Victorian father throughout, and when asked to smile thunders into the camera “I am smiling!” He and Emily often clash, particularly over what he sees as her lack of piety and she sees as her personal relationship with God.

Religion is a suffocating force: “going to Church is like going to Boston, you only enjoy it after you’ve gotten home” announces Vryling, as the three women take a stroll, wielding their parasols and swishing their skirts as if to create space around themselves. (Everyone is obsessed with death and whether it should be feared, explained by Vryling’s later comment “America is the only country in the world that looks upon death as some kind of personal failure”.)

Their brother also becomes misogynistic as he ages (or maybe he simply finds progressiveness clashing with his own wants) and Emily has to pull him up on his understanding of what it is to be female: “live as a woman for a week Austin. You will find it neither congenial nor trivial”.

As Emily enters middle age, her wit becomes sharper and she more defensive, leading to reprimands from Vinnie. After Emily’s yearned-for yet married Reverend leaves, her sister is unhelpful: “He is hardly Mr Rochester and you are certainly not Jane Eyre!”

By now Emily is ill and in pain, but she’s also carried on fighting against the constraints of her sex while others have fallen by the wayside. Even Vryling has admitted she’ll eventually revert to convention (though fittingly her husband appears only once during the film and says not one line).

Much of the action takes place in Victorian drawing rooms and during walks, though there’s a lovely scene as mourning-clad women queue behind a funeral carriage, lowering their black veils one after the other as rain pours down. History sometimes intrudes. Men are drafted to fight in the Civil War, and colourised pictures of the carnage, with the tens of thousands of dead listed alongside, show an outside world that can be dangerous and still unfree.

Emily’s poems are sometimes spoken aloud but more often they’re a voiceover, replacing dialogue, as when her father and brother argue over whether he should fight in the Civil War:

“To fight aloud, is very brave,
But gallanter, I know,
Who charge within the bosom
The Calvalry of Wo”

Her backbone may be her poetry but female friendship gives her an outlet. When Emily first meets Vinnie’s friend Vryling Buffum, like the best first meetings between women who just know they’ll get on they’re instantly talking about the most intimate, important things: the bullying Emily endured at school, heaven and hell, laced through with sheer enjoyment at their conversation.

Most films have a sidekick who could easily take over, and were it not for Nixon’s bold performance as the staunch Emily, Bailey’s Vryling could have done just that. Vryling is funny and clever and can certainly hold her own in her three-way conversations with the Dickinson sisters.

But the poet remains central, anchored in her beliefs from an early age and exuding firmness more than kindness, unconcerned about likability. Thankfully in Nixon’s hands Emily is always multi-dimensional. She’s confident in the face of convention when it comes to her writing, her relationship with god and her intelligence, but lacks it in her views of her own lovableness and attractiveness, which convention promotes as being so vital.

This is a film that requires concentration and assumes understanding and a level of involvement. It can be an exhausting and even a deflating watch. All those literary allusions and high level wit that most of us could never sustain, every line of dialogue a perfect quote with which I could have peppered this review, were I not now too busy critiquing the culturedness or otherwise of my own conversation.

A Quiet Passion is an ironic title. Emily may not have enjoyed the wider stage during her lifetime but she never stops fighting. Railing against convention, she’s understandably prone to fits of anger, and even plate smashing (“this plate is dirty” announces her father at tea. “It is dirty no longer” she replies, after throwing it on the floor.)

Her conversations with family and friends, where she always says what she thinks, may have had a small audience, but like that old philosophical question about whether a tree falling in a forest makes a noise even if there’s no one to hear it, for women being unheard is not the same as being quiet.

Available on vod, blu-ray and dvd from amazon uk

available on vod, blu-ray and dvd from amazon.com

Watch the trailer for A Quiet Passion: