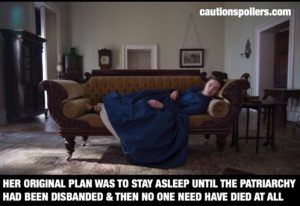 Lady Macbeth certainly isn’t a Victorian morality play but you could probably call it a Victorian intersectionality play. It is also a not-very-cautionary tale about power, including the power of silence.

New bride Katherine (who has been effectively sold to her husband’s family) is much more in control than her Shakespearean namesake, and more ruthless, always crushing any trace of empathy or maternal instinct that might appear. Having said that it’s still possible to sympathise with her predicament if not the appalling wickedness of her methods, trapped as she is by her time, her sex and her class.

Katherine (Florence Pugh) and her husband, the much older colliery owner Alexander (Paul Hilton), live with his brutish father Boris (Christopher Fairbank) and a few servants in an echoey Victorian pile on the Northumbrian moors. Everyone is conspiring to keep her indoors, and she spends most of her time in a state of enervation – looking out of her bedroom window, or sitting on the sofa in front of the unlit fire. But as soon as colliery business takes the two men away she is invigorated – out walking on the hills, hair loose, corset-less, a blanket round her shoulders. Soon she meets the new young groom, Sebastian (Cosmo Jarvis), and there’s an instant attraction which leads quickly to a passionately frenzied affair, obvious to everyone around them. As people start to talk, and her position is made clear, an ever-deepening spiral of violence and death takes hold.

Katherine is very young – sometimes she looks about 16 in her buttoned-to-the-neck white nightgown with her hair glossily cascading all the way down her back. Though in other scenes, her hair intricately plaited by her maid, her dress constrictingly modest but showing off her tiny corseted waist, she seems old and sad beyond her years.

When Katherine isn’t striding the moors or sitting primly on her sofa, she and Sebastian are having lots of noisy sex on the world’s squeakiest bed. There is nudity though weirdly not as much as I was expecting, or maybe it didn’t really register because it seemed so natural, like the frequent sex. After all what do two young people in love and lust do in an otherwise empty house? Even I can remember that, and I’m almost the Victorian nightgown-wearing generation. Far more shocking are the scenes where the middle aged Alexander makes his young wife remove her virginal nightdress and stand naked in the cold bedroom while he remains fully clothed – a classic misogynistic power play and very unsettling to watch.

The house itself is large and Victorian and rather empty, though it never seems gloomy (though this could be because I grew up in an echoey Victorian house in the North East of England). It is light-painted and even the heavy mahogany furniture cannot stop the bleached daylight seeping through the doors and windows. The house never seems oppressive in itself, only in the way that Katherine is confined to it by the men who try to control her. It is, though, silent apart from the tick of a clock, the scrape of a chair or the aforementioned loudly squeaking marital bed. In fact most of the time the place is so quiet I’m surprised I couldn’t hear her bosom heaving under that corset.

But the quiet is shocking rather than soothing. If anything it’s as jarring as the scrape of that chair across the floor. Katherine seems to understand something that many women, trying to talk their way round situations they have little control over, do not – the power of silence. She does talk, insolently and without customary feminine niceties. But she also knows that saying nothing is incredibly unsettling, especially coming from women when we are trained to be verbal, to persuade people rather than to instruct them, and to be nice, and of course to apologise for absolutely everything.

But silence isn’t the only power tactic at play. Everyone is desperately trying to carve out a space and wield whatever power that can find on someone less powerful. Seams of sex, class, race and age are threaded through this film – as two old men try to control the rebellious young Katherine, who simply won’t act or react as she should; and at times they literally treat their maid Anna (a wonderful Naomi Ackie), who is black, like an animal. Sebastian the working class groomsman humiliates Anna in an outhouse, but Katherine shows her maid no sympathy. Katherine mocks her husband’s impotence, and tries to control Sebastian as her plotting drags them deeper. While Anna retaliates by bathing her in water so hot it burns her.

The film is based on the book “Lady Macbeth of the Mtsensk District” but there are still some parallels with Shakespeare’s Scottish play here – at one point Katherine literally has blood on her hands as well as figuratively. And again it’s a situation where death leads to more and more death. But Katherine is far less experienced than Lady Macbeth. Childish and childlike, her murderous actions are fuelled first by desperation and then by what looks scarily like enjoyment. Even as she plots there is an air of impulsiveness around Katherine, as she realises the power she has over people – either pulling rank as mistress of the house in the men’s absence, or appearing drunk at dinner having got through all the precious Fleurie in her father-in-law’s absence. And although she can be needy she is ultimately the stronger one as Sebastian stumbles round the woods in a state of emotional collapse.

Despite its violence Lady Macbeth isn’t a morose film, and there is humour, often animal-related. How do you actually bury a dead horse? And then there’s the ever-watchful cat, which seems to have powers of survival in this house of death that rival Jonesy in Alien.

Katherine’s behaviour is increasingly shocking as her list of victims starts to include innocents, but it’s still hard to feel much sympathy for the men in her life. As far as Boris is concerned she has literally been bought to provide his son with an heir: “When your husband returns you will resume your duties with more rigour, Madam!” he tells her. And when faced with her behaviour, Alexander comes out with a speech dripping with hideous misogyny. Both men don’t just come to loathe Katherine but fear her too. And even before he joins in with Katherine’s crimes, Sebastian is happy enough to bully Anna.

This is the first feature film from director William Oldroyd and he’s crafted an extraordinary movie with a compelling and brilliant performance from the self-assured Florence Pugh. It’s a long time since I’ve been in a cinema where the entire almost sold-out audience sits as one at the end, in stunned silence, temporarily unable to move.

Watch the trailer for Lady Macbeth: