You are here: Home / Film Reviews / Sense And Sensibility 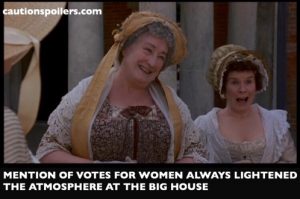 Who doesn’t enjoy looking back to what seem like happier, simpler times, where having a fortune of four thousand a year marked one out as the catch of the season, and treating oneself meant buying some new bonnet ribbons for church on Sunday. Though of course, there were dangers – chest infections were common from wearing all those dampened down muslin dresses (the better to show off one’s pert bosom, like an 18th century Wonderbra), or simply from wandering around the fields in the pouring rain.

Sense And Sensibility has aged better than many period dramas. That may sound odd – Jane Austen’s story is set in the 18th century, a time so long before smartphones that not having them in a story doesn’t make us feel something is missing. But of course any film is influenced by the era in which it is made. Just look at those Hollywood movies from the 1930s about the Tudor monarchs, they are dripping with what can only be described as 1930s-ness. Luckily Ang Lee’s film seems genuinely timeless and Emma Thompson’s Oscar winning script is a joy.

Jane’s – or is it Emma’s – wit is everywhere from the opening scenes. The film starts with the middle aged John Dashwood (James Fleet) is at his dying father’s bedside, being asked to ensure he provides for his stepmother and three much younger half sisters – Elinor (Emma Thompson), Marianne (Kate Winslet) and Margaret (Emilie Francois). He decides to give them £3000 as a one off payment, to supplement the meagre £500 a year the four women will have to live on.

But soon John’s meddling wife Fanny (a suitably unempathic Harriet Walter) is needling him to be less generous. She beats him down to “£100 a year to their mother while she lives” but even that is too much for her as “people always live forever when there is an annuity!” Eventually it is decided that in all fairness they should receive nothing, and if anything the women should pay him.

And Elinor is the mistress of gently witty chiding towards her family – after their father’s death Marianne, a talented pianist and singer, is dryly requested by her elder sister to play something a little less mournful as “Mama has been weeping since breakfast”.

With their large family home going to their half brother John (indeed he and Fanny move in with indecent haste) the Dashwood women are saved by Mrs Dashwood’s cousin Sir John Middleton (played with kindly bumptiousness by Robert Hardy) and his mother in law Mrs Jennings (Elizabeth Spriggs, playing a woman who positively bounces through life, dolling out help and assistance with great assiduousness) who offer the women a homely cottage ( by their standards) or a large country rectory (by ours) on his estate, Barton Park. Once installed there the Dashwood ladies are invited up to the big house frequently.

The relationships are of course the story. Elinor falls in love with Edward Ferrers (Hugh Grant), Fanny’s brother, who it turns out has been long if unhappily engaged to another girl. Colonel Brandon (Alan Rickman) on meeting Marianne falls instantly in love with her. She meanwhile has been rescued by the dashing Willoughby (Greg Wise) on his horse after she falls; he eventually leaves her as she has no money.

Many of the issues encountered in Austen seem hopelessly anachronistic now – marriage or a relationship is still of paramount importance to many people but a good marriage is usually seen as one bound by love rather than money. And a level of middle class poverty that requires cutting one’s servants from about 10 to two at first glance looks like the very definition of a first world problem.

But the women in Austen’s world, though outwardly well to do, were hugely victims of circumstance and had little agency. They couldn’t work, and were at the mercy of laws of primogeniture that meant estates were passed down from man to man even if this left any number of women homeless, or left them dependent on the support and wealth of other men (which meant a whole new set of boundaries to establish to ensure propriety).

And women were considered over the hill by their mid twenties. (I can’t think of a single person who would have married me in my mid twenties. I was a total fruitcake and sometimes wondered if I had “run, run like the wind” tattooed across my forehead as that’s what men seemed to do when they met me).

In fact I was in my mid twenties myself, and therefore clearly over the hill, when Sense And Sensibility came out in 1995 which at least meant, as a poor old spinster, I had time to watch it in between embroidering a cushion cover and a little light gardening.

Wise is suitably selfish as the dashing Willoughby. He clearly does love Marianne though he is still a cad (we know that because of the epithet “dashing”. Dashing and cad go together like pudding and custard, with a sprinkling of bounder to spice things up a bit. And also because he brings Marianne flowers even he admits he stole from outside. That old saying “when a man tells you what he is, listen” springs to mind).

Hugh Grant manages not to be too stuttery and over the top while still maintaining that diffidence lightened with self deprecating British humour that is his trademark. Ferrers really wants to go into the Church, “a small parish where I might do some good. Keep chickens. Write very short sermons” which is quite possibly what Hugh Grant likes to pretend he wants to do too.

Alan Rickman is brilliant as the rather worthy, quiet, Colonel Brandon, who falls instantly in love with Marianne. As the story unfolds it becomes clear just what lengths he has gone to in the past to help young women who have fallen between the cracks of polite society, and his quietly measured performance reminds us once more just what we are missing now the actor is no longer with us.

Mr and Mrs Palmer, Mrs Jennings’ daughter and son in law, pop up regularly as houseguests and manage to provide light relief without being irritating. Hugh Laurie as Mr Palmer is a curmudgeonly delight, his face held in a permanent expression of “oh god what now”, holding his little son at arm’s length like a smelly dog that needs a bath, while next to him his good natured but silly wife babbles on about his brilliance with their baby. One wonders whether he was always like this or marriage to the irrepressible Mrs Palmer (Imelda Staunton) has made him so.

And of course Kate Winslet and Emma Thompson are both wonderful and completely believable as sisters – the younger bright but unrelentingly romantic, the elder already having had that hopefulness crushed from her.

Naturally everything works out by the end. Everyone marries the person we knew from the beginning they should marry, there are probably some new bonnets bought, and lovely Colonel Brandon appears in his soldier’s uniform.

Sense And Sensibility is a sheer delight from start to finish. I am a sucker for bonnets and muslin dresses, and no one loves comments about the oppression of women hidden among witticisms and bon mots more than me. Plus it ends with a wedding! The only thing stopping the film getting five stars is that it is very long at 2 hours and 20 minutes, and there is the odd moment where it did feel like I had been watching it since some time in the 18th century.