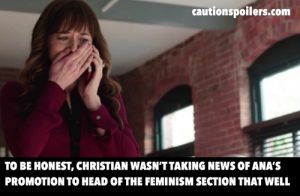 I can think of worse ways to spend a morning with a pair of handcuffs, but only if you’ve just been arrested.

Fifty Shades Freed is pretty bad. Worse than Fifty Shades Darker, which, while not great film-making, at least had a sense of humour (both deliberate and unintentional).

Dakota Johnson is a good comic actress, and she carried Darker, but here there is only one joke (two at a – safe word at the ready – pinch).

It’s quite a good joke: Sawyer, Ana’s security man, says they need to restrain the intruder they’ve beaten to the floor. “I don’t have anything” replies Prescott, Ana’s security woman. “We do!” pipes up Ana.

Ah yes that safe word. It’s supercalifragilisticexpialidocious. It’s not really. But the sex scenes would be more fun if it was. Let’s face it, everyone loves a sing-song.

And I guess that’s the problem with Fifty Shades Freed, it’s not much fun. The plot is basic, and easily guessable even if like me you’ve forgotten the last two instalments of this franchise apart from the food. And the sex is a bit dull.

I’ll say one thing though, Jamie Dornan actually gets naked a lot more this time, having spent most of Fifty Shades Darker with his trousers staying resolutely on, despite Johnson stripping off constantly and then being fastened to a bar and flipped over (oops seems like I have remembered some of the last one after all).

And they both have incredible bodies. Johnson in particular is so stunning she makes putting on tights look sexy, and she doesn’t even jump around while she’s pulling them up. Though that’s possibly because she knows they’ll end up round her ankles anyway in about 5 minutes, and not for the reasons we mere mortals find that happens with tights.

By the way, when I say food, I mean the juicy steaks she cooks him, not the ice-cream they dribble over each other. 9 1/2 Weeks did food and sex brilliantly 30 years ago, and probably can’t be improved upon unless you’re using food that wasn’t even invented then, like Pop Tarts.

The story is a continuation of the last film. They’re on honeymoon, and Christian (Dornan) is being his usual controlling self by demanding Ana (Johnson) keep her bikini top on on the beach, when every other woman has got hers out. “It’s boobs in boobland!” exclaims an exasperated Ana, which is true, and which the men watching will be grateful for. But his server room suffers an arson attack, and files are missing, so they have to return home.

It turns out that Jack Hyde (Eric Johnson), her ex-boss from the publishing company SIP (which Christian bought, and where Ana still works), blames the couple for ruining his life.

Hyde is angry; so angry, he doesn’t really bother much with disguises. Luckily, he still manages to get through the security team’s cordon remarkably often.

I used to be an editor and I know how cut-throat the world of publishing can be, though usually that would mean a caustic literary jibe from a bearded man in a tweed jacket, not someone literally wanting to cut one’s throat. (One of the film’s tropes is names, as hierarchy and as barbs. Christian’s anger that Ana won’t change her surname to Grey; her contradictory putdowns to women that they call her Mrs Grey; ensuring her colleague Liz knows that Ana now calls their boss Mr Roach by his first name. Passive aggression is often the weapon of the powerless, and is rather suited to publishing.)

Eventually Hyde kidnaps Christian’s sister Mia (Rita Ora), sending Ana a picture of the tied-up woman gagged but screaming, and it was so funny I laughed, which as a moany old feminist is not something I ever thought I’d do. Sorry Rita, I like you really.

To be fair Johnson tries to do something with her script, besides run it through a shredder which would’ve been my suggestion. But even she gives up eventually.

Dornan seems uninvolved and bored, which is annoying as I paid £8 for my ticket and I expect actors to keep it up (no not like that, Jamie!) til the final frame.

The other returning characters have very little to do. Ora is in only a few scenes, and like last time she’s fine – certainly not terrible, and she seems to be enjoying herself. Eloise Mumford, as Ana’s best friend Kate, does what she can, though I spent the whole time thinking how much she looks like British TV presenter Kate Thornton.

Christian Grey’s controlling behaviour is always unpleasant to watch, though more so than last time; his behaviours are common to emotionally abusive men, both rich and poor. He claims he’s limiting his wife’s freedoms because she’s in danger, but ultimately she’s still scared to tell her husband that she’s gone out with Kate for drinks.

There’s lots of sex and nudity, and at one point Ana washes and cuts her husband’s hair; though I was disappointed she didn’t squidge it into spikes when shampooing, so he looked like Vyv from The Young Ones or The Prodigy‘s Keith Flint, which is the law in the UK.

I know, I know, I’ve been pretty brutal. So what’s good about it? I liked the soundtrack, though being 147 I have no idea who any of the performers were. And there’s a decent car chase when Ana has taken the wheel of Christian’s supercar (no I don’t know what type it was) and soon after they realise they’re being followed.

But the lack of any comedy, or really raunchy sex, or a reasonably complex plot, leaves little meat to grasp, except those delicious looking steaks that Ana cooks up for her husband. You see, even there they could have got in a couple of really bad puns about Sir Loin, or Fill-it, and I’d have given it an extra half star.