You are here: Home / Film News / Gerard Butler Has Fallen On His Feet Again 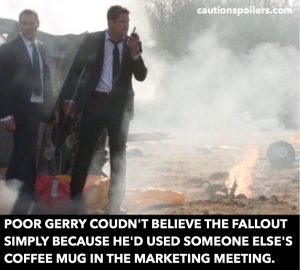 Hurray! Gerard Butler is helping the Fallen once more, whether they like it or not, like a God-botherer who won’t stop knocking on your door despite you patiently telling them time and time again that you are quite happy on the dark side, thank you.

Because now it’s official that – after Olympus Has Fallen and London Has Fallen – he’s back for a THIRD time! Next year Butler starts shooting (shooting being the operative word with hunky Mike Banning) Angel Has Fallen. And no it’s not about the London tube station, or indeed the Angel of the North, that beautiful but enormous sculpture in Gateshead that if it did fall would actually cause significant damage. Apparently the Angel in question is the president of America’s plane, Air Force One.

“London has Fallen” did really well financially but it hardly wowed the reviewers (“Better than Gods of Egypt” isn’t exactly critical acclaim). I hope it does well though as I’m already looking forward to no4 in the franchise (you all know how much I love Gerry and frankly for me the worse the film is the better – I adore watching him gamely carrying on and actually acting well through a complete stinker while everyone else has given up and metaphorically gone back to their mum’s for tea. He is nothing if not a consummate professional. Oh GOD I wrote consummate in relation to GB – excuse me while I go and have a cold shower. Okay I’m back! Now where were we).

So I think in the next instalment we can expect some shooting, and running, and more shooting. In the new Jack Reacher they realised Cruise was so old that not only would they have him running for a bus but that HE’D MISS IT. Maybe in “Fallen x 3 – I know, I should Really Look Where I’m Going Next Time” Butler can jog along quite slowly before hopping on to one of those airport buses that take you from the terminal to the runway.

Anyway if no3 doesn’t make a shed load of cash I can imagine the future sequels becoming less and less important as Budgets Have Fallen (see what I did there. I know, I’m amazing). Perhaps “Slough has fallen but nobody is that bothered”, then “Oh look a minor town with an ancient sheep market has fallen” until eventually he’s starring in “We think a rather small and insignificant hamlet in the middle of nowhere that no one has ever heard of has fallen – but they don’t have broadband yet so we can’t check”.

If you can’t wait that long for your next Gerry Butler fix (believe me I know how that feels) then check out my reviews for Reign of Fire, Gods of Egypt, Nim’s Island, Chasing Mavericks and the 5-star Coriolanus. (God I had no idea I’d seen that many of his films. Sorry.)