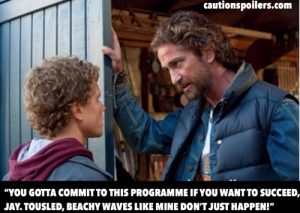 Man needs an opponent, and nature can often fill that void. Like volcanos, tornados and other freaks of nature and weather, giant waves seem to acquire a life of their own, a sort of anti-humanity on which we can hang our battles with them, that force us to be humble or punish our hubris.

But never mind that, we get to see Gerard Butler in a wetsuit on a surfboard, and there are far worse ways to spend a couple of hours. And I say that as someone who has never surfed, for good reasons which – yes! – I am going to share with you right now.

First, I grew up in the North East of England, where the water temperature is so numbingly cold we end up looking like extras from Avatar. And yes you could suit-up but as you can be banished from Newcastle simply for wearing anything warmer than your own fake tan on a night out, that might be frowned upon. Second, sharks. Third, spending ages getting into a wetsuit knowing that after two children I’ll probably need a wee in about 3 minutes. And fourth, the awful hair thing.

But that doesn’t mean I don’t like to imagine myself gliding through a moving tunnel of water on a board, looking amazing in a bikini, though perhaps in warmer climes.

Sadly the waves in Chasing Mavericks are way too terrifying for both that and my usual airy “that doesn’t look too hard” response to movie action: like I did with Noomi Rapace performing surgery on herself in Prometheus before fighting off an alien and, worse, Charlize Theron; and John Wick’s driving, even though I take the long route to Waitrose because of a scary roundabout.

There’s a sweet tale at the heart of Chasing Mavericks, and while we’ve seen plenty of “fatherless boy coming of age” stories this has more to offer than many examples of the genre; with its reluctant father figure and a teenager who also has to cope with a home life that already makes dreams harder to aim for.

This is a true story about Jay (Jonny Weston), rescued as a boy from the waves near his home by Frosty (Gerard Butler). Frosty is an expert and obsessive surfer. Fast forward seven years and the now-15 year old Jay is also an expert and obsessive surfer so Frosty agrees to teach him how to surf the Mavericks; massive waves that appear every few years with El Niño that nobody else actually believes exist, despite them being so huge you can’t really miss them.

While characters like Frosty are easy to mock, his teaching methods are nothing if not thorough – Jay has to totally commit to an intensive programme of sexy gruffness, I mean gruff sexiness, I mean paddle boarding for miles across the bay, writing essays, learning about currents and being able to hold his breath underwater for four minutes.

Jay has only 12 weeks to learn all this, all the while going to school, holding down a job at a pizza restaurant, getting his constantly-fired mom out of bed in the morning, mooning over his older friend Kim, helping his druggy best mate, and working with Frosty to build Frosty’s wife Brenda (Abigail Spencer) a new kitchen.

I dream of a new kitchen. Gerard Butler seems like the kind of man who would build it for you and then shag random women up against the new units when you were out, but if you get some more cupboard space and a nice island, and perhaps a marble pastry board out of it, frankly who cares (I do love baking though).

Sadly tragedy strikes, and lovely Brenda dies. Just after the new kitchen has gone in. After the funeral poor Frosty really can’t cope without her (I felt the same and I’d never even met her).

But by now peak Maverick season is upon them, and as the waves reach their zenith Jay is deemed ready to attempt to surf them – with an audience of Frosty, Kim, and lots of onlookers. No pressure there then, Jay.

Chasing Mavericks is an endearing story, and while it can be formulaic at times in its execution, it’s worth a watch. I enjoyed it despite knowing absolutely nothing about surfing (well, I didn’t before. I do now!). The action is exciting, and the relationships are, if not particularly original, portrayed with enough depth and humanity to be engaging and believable.

Butler is always watchable and here he is suitably gruff, a reluctant father figure who already shirks his responsibilities where he can to indulge his hobby. His Frosty is one of those men who are happy to help other people but will dump on their partner in order to do it, often to great acclaim (bitter? Moi?). And Jonny Weston as Jay is excellent, driven but pulled in different directions because of his family situation.

Brenda is, like many female characters, underwritten. She seems to be there simply to highlight, and bear the brunt of, Frosty’s irresponsibility. One wonders what interests Brenda had given up to support Frosty and their relationship. I’d have liked to have heard more about her before her plot-device death.

As sports films go, there’s enough here to appeal to both surfers and people who after seeing Jaws now sit on the beach flicking through kitchen catalogues. And who knows, I may even get in a wetsuit some time soon, now that I live down south (though to be honest it’s not the getting into one that bothers me, but the getting out).