You are here: Home / Trailers / New Toy Story 4 trailer: and when will they release Duke Caboom’s training videos? 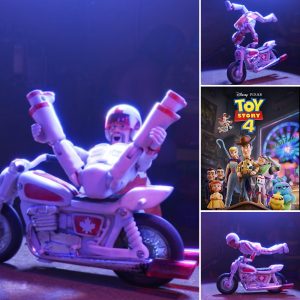 Duke Caboom, Canada’s Greatest Stuntman ™, is voiced by Keanu Reeves – but let’s face it, we all know the man could do those athletic motorbike poses standing on his head.

Forky (Tony Hale), a toy made by Bonnie at school out of a spoon, initially doesn’t even know he’s a toy – an identity crisis worthy of Keanu Reeves’ cloning clunker Replicas. Luckily once the unassuming utensil has recovered, he’s soon off on a family road trip with little Bonnie and the others in a campervan.

But poor Forky goes missing, and a find-and-rescue mission has to be put into action – including Duke Caboom, though we know from the previous trailers that Duke may not be able to do the stunts he’s famed for.

Toy Story 4 opens in the US and UK on 21 June. It’s directed by Josh Cooley and stars Tom Hanks as Woody, Tim Allen as Buzz Lightyear, Annie Potts as Bo Peep, Keanu Reeves as Caboom, Jordan Peele as Bunny, and Keegan-Michael Key as Ducky. Watch the new trailer below. You can also see the previous trailer here, and the teaser trailers here.