You are here: Home / Trailers / The “Sonic The Hedgehog” trailer is here and I can’t say it prickled me 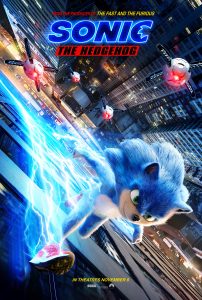 What IS that thing?

It’s a hedgehog, but with legs and arms.

It looks like a xenomorph if you re-made Alien for children.

It travels faster than John Wick when he realises he’s run out of pencils and WH Smith closes in five minutes.

And it’s up against Jim Carrey, sporting a moustache so wide and twirly I’m thinking of adding him to my Kenneth Branagh version of Guess Who?

Yes, we’ve been gifted/tortured with the Sonic The Hedgehog trailer, which for some reason they’ve soundtracked to Coolio’s Gangsta’s Paradise. Still, at least no Brexit allegories.

Sonic The Hedgehog is a live-action adventure comedy based on the global blockbuster videogame franchise from Sega that centers on the infamously brash bright blue hedgehog. The film follows the (mis)adventures of Sonic as he navigates the complexities of life on Earth with his newfound – human – best friend Tom Wachowski (James Marsden). Sonic and Tom join forces to try and stop the villainous Dr. Robotnik (Jim Carrey) from capturing Sonic and using his immense powers for world domination.

Directed by Jeff Fowler, Sonic The Hedgehog is released on 8 November in the US and 26 December in the UK. The film also stars Tika Sumpter, and Ben Schwartz as the voice of Sonic.