You are here: Home / Trailers / The final “Angel Has Fallen” trailer: however thirsty you are you can never be as thirsty as MIKE BANNING 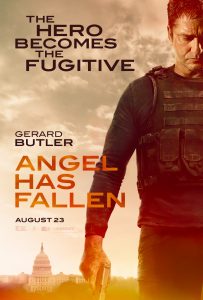 The hero becomes the fugitive in the final Angel Has Fallen trailer (scroll down to watch it).

And if that isn’t enough to ensure the next film in this franchise is the Mike Banning / John Wick crossover we’ve been waiting for, I don’t know what is. I bet there’s a cute dog in there somewhere, too.

He hasn’t mentioned being “thirsty as FUCK” yet but I’m sure he is, after all that running around.

Along with the new trailer are seven new character posters, and yes I resisted the urge to just download the one of Gerard Butler seven times. I’m nothing if not professional.

This outing for Banning sees the Secret Service agent framed for an assassination attempt on President Trumbull (Morgan Freeman – yes there is a god! Also played by him). On the run, Mike seeks out his woodsman dad (Nick Nolte) while trying to stay one step ahead of his pursuers.

You can watch the first trailer here and check out stills from the film, and the international trailer from June. Angel has Fallen is directed by Ric Roman Waugh, and is released on August 21 in the UK and August 23 in the US.