A teaser trailer has been released for up coming indie psychological horror Goodbye Mary. Described as a psychological drama about power, leadership, friendship and women’s positions within society, the film focuses on a group of women whose friend Mary has died. 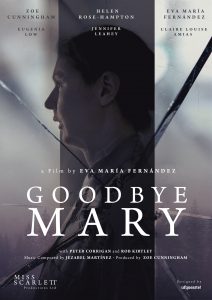 In the teaser, we see Jane (Zoe Cunningham) transfixed by something unseen in a room (I know Zoe and am tempted to ask her what it is even though I know she won’t tell me).

Mary, a celebrity TV journalist, has just died in a car accident. She was the most popular girl in college and the leader of a group of best friends, who are all invited to Jane’s house for a special farewell. During the group’s reminiscences about Mary old grievances are raised and fractures in the group start to show. Tensions escalate as the women fight to keep their status within this small community, and things start to finally unravel when Jane begins seeing Mary. The “ghost” of Mary seems to have a hidden agenda that leads to disastrous consequences for the group of friends.

The film also stars Jennifer Leahey as Mary, with writer-director Eva María Fernández also appearing. It’s released in the UK on 31 May 2020.

I’ve interviewed actress Zoe Cunningham twice. Check out our chats about collaborative apocalyptic drama Breathe Easy, and the short You Have Been Chosen, filmed on a smartphone.