You are here: Home / Interviews / Zoe Cunningham On Starring In Smartphone Short “You Have Been Chosen” 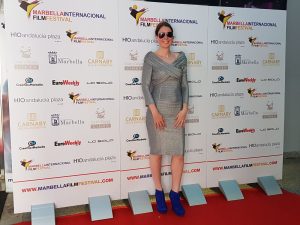 Actress Zoe Cunningham stars as Fiona in Simon Horrocks’ You Have Been Chosen, a short film shot on a smartphone about a smartphone app that takes over Fiona’s decision-making – one of those apps that sounds like a great idea at first…

I spoke to Zoe about making the film, and navigating the changes in filmmaking. (Check out my You Have Been Chosen review.)

Tell me how the fictional app – The Decider – works. Do you give it two choices you’re indecisive about, or does the app direct everything from the start without your input?

At the start my character Fiona is clearly indecisive. She gets this pop-up that says “You have been chosen, click here to install the app”. Then the app asks her loads of questions about her background.

Then it starts making recommendations. It’s a really clever app – she doesn’t have to ask it a question, it will just direct her. One of the themes of the film is her ordering coffee, so it goes from her trying to order and making a real pig’s ear of it, and not even ordering what she wanted, to the app going “Order this”.

And then after she’s been trained a little bit by the app, telling her what to order, she becomes more confident and can just order it on her own, because the app has helped her to make decisions.

It starts off working well as we all need a bit of help to be more confident and do what we want, but then it all goes wrong.
Back to top

Fiona and her boss, Paul (Zoe, and Paul Anderson)

And this was shot on a smartphone, presumably it’s not just point and film – do you still have all the lighting and everything else?

You can still just have a phone and have incredible stuff around it, like lenses on the actual camera. And you can get specialist dollies to wheel the smartphone around.

A lot of people are using it now in place of Steadicam – you can get a gimbal for your smartphone and use that as you would a Steadicam. A Steadicam is a very expensive piece of equipment and the operators you need to use it are also highly trained and expensive. But you get lovely flowing shots which give production value. So actually the fact that you can do this on your smartphone is supercool.

With a smartphone film you also have this option of kind of styling it out, if you see what I mean. So thinking that it’s obviously not a Hollywood production, but that’s okay, and we’re going to use that in our film.

Or you can use lighting. And then there’s gradations in between – so we use lights, but not as many lights maybe as I have on some other projects.

There was a feature film screened at the Mobile Motion Film Festival with You Have Been Chosen – that was shot on smartphone too, but the director didn’t hire any crew. Instead she gave the smartphone to the actors and got them to film each other. Isn’t that a very, very interesting idea? You get those specific shots, like you get a shot of you filming your mates – it’s using what you’ve got, it’s making an asset of what you’ve got, and using it to style your film.
Back to top 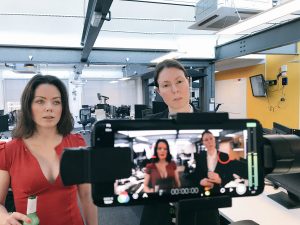 In terms of the lenses, do you end up with a small smartphone with lots of stuff literally stuck onto it?

Lenses are physical so they’re physical optical things that you have to put onto the camera – you couldn’t have a lens with an app.

You could have filters but with anything like that you’re effectively doing the same things you’d do in post-production anyway, and even on a smartphone film you’re still going to do post-production, at which point you can add filters or whatever.

I’ve seen Simon’s phone with lenses on, they have to be quite small as the aperture on the camera is only tiny. I do remember Simon’s phone in the gimbal, you have to stick some pound coins on it because otherwise it’s not heavy enough to work properly.
Back to top

There is no clever, new cheap way to do audio. In many ways audio has always been the most difficult part of filmmaking, and audio is the thing that will most quickly make your film look unprofessional.

If you have, say, a few dodgy camera shots you can style it out, if you have a dodgy audio it makes it all look and feel low quality. You can do post-production on audio, but it can be very, very painful.
Back to top

So it’s really just a normal smartphone. With a good battery life!

For You Have Been Chosen we used a Samsung Galaxy S8.
Back to top 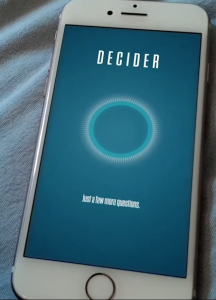 When you’re acting in a film that’s being filmed in a new way, how is that for you? Does it feel disruptive or are you used to dealing with new ideas because of your experience in indie filmmaking?

One of the key things about acting – there are very many different styles of acting, but the one that I subscribe to is quite modern and encompasses Method – is that you need to find a way to believe in your fictional circumstances enough that you give a real reaction. So if we were in a film and you were playing a character who was about to kill me I would have to find a way to believe that.

Part of it is about cutting out distraction, and one the biggest distractions to actors, like a lot of other things in life, is your own ego.

So actually if you’re sitting there thinking “Do I look okay? Do I look scared? Do I look good? Does my hair look okay?” all of that is interfering with what you should be thinking, which is “Oh my god she’s got a knife! What’s she going to do with it?”

So I think there are pros and cons, but for professional actors they just get on with it, and actually they will be un-phased by anything.
Back to top 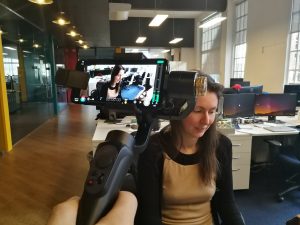 Zoe being filmed for “You Have Been Chosen”

It’s a short, how long did it turn out to be and what did you think when you saw it?

It’s about 15 minutes long. I saw it in Zurich for the first time. I thought it was great, really, really good. It was interesting for me watching it having filmed it and not knowing how it was going to come out.

There were lots of clever shots, and lots of bits where I could see where Simon had filmed on different days – there’s a scene in the coffee shop where I work, we came in at the weekend when it was shut and they didn’t know we were here.

We stood our guy behind the counter and I ordered my coffee, but we also did a little bit of prep the day before and filmed me walking up to the counter.

So actually there’s footage of me in a busy cafe and then it cuts to me ordering a coffee, and Simon said “your acting is so good that you don’t notice that everyone just disappeared behind you in the cafe!” I  wouldn’t credit me with it but I would credit the editing as they’ve done a really good job. You probably could see it if you look for it, but I didn’t notice it and I knew it had happened.
Back to top

When you’re watching yourself, how does that feel? Do you see it as a character who happens to look like you?

It’s a confidence battle and we can all say “wouldn’t I be a better person if I had no ego and could engage freely in the creative process”. But no, I go “what do I look like? Do I look okay? My hair’s a bit messy, am I acting ok?” and sometimes I’ll miss what’s going on in the film because I’m looking at me, which is also why I don’t get involved in the editing because I’m not a reliable witness!
Back to top