You are here: Home / Trailers / WHAT! shhh sorry i mean what… THAT Super Bowl Teaser For A Quiet Place… 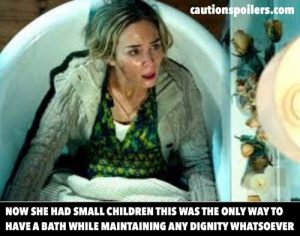 Oh. My. God. Yes I’m writing something about football. American football! (I don’t know anything about British football either so, whatever).

Anyway after that first terrifying trailer for A Quiet Place a couple of months ago, at least I finally had a really good reason to tell my kids to pipe down.

And now I’m starting to wonder if actually it’s all part of a plan by Emily Blunt, mum of two, to help all us harassed mums (I mean parents! No I mean mums. Or moms) get rid of all THE MOST irritating toys from our children’s bedrooms/playrooms. You know, the ones that when you step on them during the night not only hurt more than Lego, but also emit a million decibels of NEE-NAW-NEE-NAW-NEE-NAW.

So even if A Quiet Place looked rubbish I’d still be saying “thank you Emily Blunt”, but actually it just looks better and better.

Monsters have invaded, silence is golden, but most terrifying of all, at the beginning John and Emily’s characters appear to have three children. (Wasn’t it only two in the first trailer?)

Check out the Super Bowl TV spot for A Quiet Place below, starring Emily Blunt, John Krasinski, and Millicent Simmonds. The films is directed by John Krasinski and is released on 6 April 2018 in the UK and USA. It premieres at the South by Southwest Film Festival in March.