You are here: Home / Film Reviews / A Quiet Place 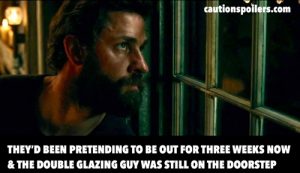 With A Quiet Place, director and co-writer John Krasinski proves himself to be a master of relentless (and I mean relentless) tension, which doesn’t stop until the final frame.

This film is only 90 minutes’ long but it’s a 90 minute crescendo of suspense, peppered with shocks and heartbreak.

This is a battle for survival, and careless talk costs lives. Actually almost any talk costs lives, unless there’s a louder noise to mask it; a noisily flowing river, or a thundering waterfall.

Silence is golden, with every element of everyday life stripped back and rebuilt without noise. No one wears shoes. Monopoly is played with soft counters.

And I’m guessing the Lego was ditched on Day 2, possibly after an unfortunate nighttime incident resulting in the demise of Grandma.

Parenting is always hard. How do you keep your children safe? When should you teach them to be independent? How do you make them feel loved when they scream (silently or not) that you don’t love them? But mainly, how do you keep them safe?

This is a horror film but it’s also a drama about family; and variations on the same issues many of us face pop up here, though of course without the shouting.

For Evelyn (Emily Blunt) and Lee (Krasinski), theirs is a life of constant background alertness, and frequent hair-trigger responses. A Quiet Place starts 89 days into their apocalypse. Nearly everyone is dead, killed by blind monsters who hunt by sound. (The parents’ names are never used but I wonder if both are unisex as a nod to the likelihood that in a post-apocalyptic wasteland, in the future one may have to be both mum and dad.)

Newspapers abound, their headlines tracking the end of the world from New York lockdown to a rather incongruous (if you’re northern) “IT’S SOUND!” in huge type across the front page of a tabloid.

It reads as if Oasis and the monsters had sat down for a couple of beers and come to some Earth-share agreement along the lines of “we’ll keep Manchester and football, and you can have the whole of America and Emily Blunt”.

I make no secret of my adoration of old newspapers providing back story in post-apocalyptic dramas (it’s even better if they’re spinning towards us with a solemn voiceover). And it’s great to see print news battling on through the Last Days Of Humanity; though at some point filmmakers are going to have to switch to The Last Days Of Twitter and an #ApocalypseNow hashtag game.

Evelyn and Lee live in an isolated farmhouse with their three children, making family trips into the deserted town over footstep-muffling sand, to forage through abandoned shops. It’s on one of these trips that their youngest son Beau finds a toy space shuttle; and as any parent knows, those things are noisy.

Fast forward a year and they continue to silently stumble on, still not having come to terms with their grief at what happened to Beau. Silence is essential, with every tiny noise followed by frozen terror or a mad dash to relative safety as the monsters come for them. Oh and Evelyn is pregnant.

A large part of the enjoyment of a film like A Quiet Place for gawpers like me is the details of existence and survival. Humans are relentlessly adaptable, but here there is no room for mistakes.

Non-creaky floorboards are marked, a reminder of a carefree parallel universe where teenagers still creep back into the family house after an illicit night out. Even plates are too noisy for mealtimes. And they’ve built a heavily-lidded wooden crib for when the baby arrives, complete with an oxygen supply.

Daughter Regan is deaf, the family’s resultant knowledge of sign language presumably a huge advantage from the earliest days of the disaster. Lee spends days in his workshop studying the human ear and trying to build working hearing aids for her.

Meanwhile Regan (a devastating portrayal of guilt and loneliness from deaf actress Millicent Simmonds) spends days blaming herself for Beau’s death, convinced her father hates her. Her younger brother Marcus (Noah Jupe) is an angry go-between. Her parents blame themselves.

While Regan seeks redemption through responsibility, Marcus rails against being forced to grow up, his childish terror raw and frozen.

A Quiet Place is more than just a brilliantly acted “year in the life” (though it is indeed brilliantly acted). On one day a perfect storm of thunderous disasters crash into each other, and a family which can only survive if everyone can be independently reliable and brave faces a series of extraordinary tests that ratchet up in fear and menace. Oh, and Evelyn’s waters have broken.

The family are entirely believable and entirely admirable, finding reserves of persistence and resourcefulness when all should be lost. I’d have been dead after the first stubbed toe, or, dare I admit it, newly discovered grey hair; my children five minutes in, after an “it’s not fair!” toy-related spat.

Monsters are unveiled gradually from fleeting glimpses through leafy trees, to scaly fingers, and eventually full height in all their ugly glory. We don’t find out much about them: where they’re from, if they are loners, though it takes more than the common cold to kill them. This is not an allegory asking the (now rather boring) question “but who, really, are the monsters here?” We know who the monsters are and it’s not Lee and Evelyn.

As in most horror films there’s the odd jarring note, this time over inconsistencies over what is and isn’t a danger. Why leave all those family photos in wooden frames nailed perilously to a wall? My hall is covered in photos (no, not those enormous white canvasses of grinning families in stripy jumpers leapfrogging each other; it’s obvious they’ll die first when the apocalypse comes) and they’re always falling off with a loud thud when I walk past.

Though you could equally put the inconsistencies down to adults with minds already filled to capacity remembering a million noises to suppress, like an audio version of whack-a-mole.

There are a couple of dips, but mostly the film is so nerve-shreddingly taut that 10 minutes from the end I was beginning to hold an unreasonable personal grudge against the director. Too scared to watch, I was also too scared to leave.

This is a terrifically well-made movie, an almost old-fashioned horror that blends psychological battery with hideous, murderous monsters to near-perfection.