You are here: Home / Trailers / Shiver Me Timbers, It’s The Siberia Poster & Trailer 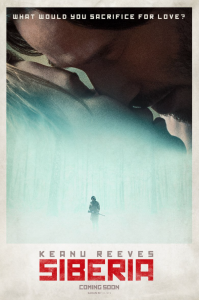 In those temperatures? My sense of decorum, maybe. My socks, never.

Rent Siberia on VOD from Amazon.com

Buy Siberia from iTunes US

The poster for romantic thriller Siberia has been released, and it looks like a perfect mix of very hot and very cold. As does the trailer, below – snow, icy Russian gangsters, warm baths, fire.

Keanu Reeves plays a diamond dealer who travels to Siberia when his business partner disappears, and while there he also falls for Katya (Ana Ulartu).

Check out the trailer below – it looks like Reeves gets to kick some ass and fire some guns again, and have a bath with Katya. Presumably both naked, which makes a change from both Constantine and Chain Reaction when poor old Rachel Weisz is in the tub fully-clothed and he’s sitting on the side. I bet she’s jealous as hell watching this.

Siberia is directed by Matthew Ross and is being distributed by Saban Films. It also stars Molly Ringwald and was released in the US on 13 July 2018 – there’s no UK release date as yet. (And check out my Why Keanu Reeves is Doctor Who article here)