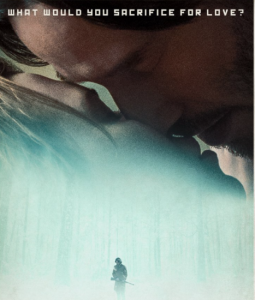 In those temperatures? My sense of decorum, maybe. My socks, never.

That and the nihilistic icy clarity of how Lucas Hill’s story will end make it hard to really engage with.

Still, his relationships with his new girlfriend and her brother are bleakly funny, and there’s a beautifully Wick-like moment when he takes on two attackers while determinedly holding on to a bottle of vodka.

Lucas (Keanu Reeves) is chilly of demeanour and frozen of heart, though Russian lover Katya certainly works hard to introduce a thaw into East-West relations.

He’s a diamond merchant, in the Siberian town to try to rescue a $50 million deal that’s about to collapse into retribution and murder; she runs the local cafe, where her only customers appear to be her burly brothers and a putative boyfriend.

Lucas has arrived from America by way of St. Petersburg, Russia’s most beautiful city, still dotted with pastel and white buildings that look like over-elaborate wedding cakes.

His Russian business partner Pyotr (Boris Gulyarin) has disappeared, and when Lucas isn’t downing vodka, he’s calling Pyotr on various burner phones, increasingly desperate, a bit like me when I’m trying and failing to get on the press lists for each new instalment of John Wick.

It would be remiss of me not to search for more spurious Wick-edness, though actually it’s there for the taking – unsurprising considering the introspective hitman brought out Reeves’ best abilities as an actor and a physical performer.

Lucas can shoot, and speak fluent Russian. He favours same colour shirt-and-tie combos. There’s an oath of brotherhood. And a dead dog! Wick near the start of his career, his senses acute but not yet pinprick-sharp enough, perhaps. Or at the end, exhausted by constant watchfulness and ennui.

It’s Katya (Ana Ularu) who rescues Lucas from that nighttime fight outside her cafe, and takes him home. He makes her French toast the next morning to say thank you. It takes them a while to have sex, but once they do there’s no stopping them.

Reeves is excellent at internalised worry and stoic loneliness. Siberia probably isn’t any more bleak than Lucas’s home life in America. He does a lot of enigmatic pondering too, rising levels of fear corresponding to an increase in the number of “fucks” in any given sentence.

Lucas isn’t likeable. He’s hugely selfish, and though his marriage has shrunk to friendship it only takes an unintended slight from his wife in a video call to send him running from his 1970s-style hotel room to Katya and sex on a melamine cafe table.

He’s expert and accomplished though. There’s something compelling about a man showing off his expertise without actually showing off – the scene where he’s lost in his own abilities, assessing diamonds for evidence of fakery, aware how much is at stake, sees him transformed.

Watching his self-importance squeezed out of him is brutally fascinating. Even his manner of speaking is wordy and pontifical; talking the way other people write. He faces his increasingly parlous situation with first panic, but eventually stoicism for his own situation and guilt about his inability to untangle Katya from his working life.

Siberia is chilly and dour. But there’s a luxuriousness to such unashamed Russianness. Boris Volkov (Pasha D. Lychnikoff) and his henchmen are 100% deliciously cinematic gangster chic. It’s a heady mix: medallions and pockmarked skin, nostalgia and modern tech.

The Siberians luxuriate in their country’s stereotypes while at the same time gleefully sending them up for the benefit of The American. Clothes, homes and lives may be drearily practical, but they seem to enjoy the mythologised romance and melancholy of their very existence, sinking back into a sense of existential gloom.

Are they cliched characters? I’ve been to Russia, though admittedly back in the 1980s, mid-Glasnost and Perestroika (ask your mum). Many of the Russians I met were like those in Siberia, though looking back they were probably sending me up too, fond as I was during my late teens of mythologising doomed romance and luxuriating in existential gloom.

Lucas’s contacts are prone to unnecessary analogies: “patience… is like air in a sealed room, no matter how much you start with eventually you’ll run out” says Boris, who could make a good living as a writer of Christmas cracker aphorisms if work in the gangster sector dried up.

His love affair with Katya is initially a welcome distraction, though it doesn’t take long for her to start quoting Russian proverbs and needling him about his wife. “Fuck me right now like you fuck your wife” she demands. Though judging by Lucas’s marriage, for real accuracy I hope she was writing a shopping list in her head.

I liked Ulana as Katya, pragmatic but so easily crushed. And I liked Ivan the bear-like brother, developing a sneaking fondness for Lucas while knowing he’ll be picking up the pieces of his sister’s shattered confidence. In fact there’s quite a lot about brotherhood, with Boris proposing an initiation into fraternal bonding that finally makes Lucas realise how little he can protect his new girlfriend.

The script, when it’s not being ponderously Russian and drowning in similes, is bleakly humorous, with everyone making dour asides to each other. “What would you do if I asked you to sleep with me”?” Katya asks Lucas the morning after the fight, because everyone already thinks they’ve had sex anyway. “Now?” he mumbles in shock, his mouth full of toast, which surprised me but then I’m not much one for breakfast.

Later as she drives him back from his meeting, she asks “How you say in English: ‘Good News Bad News’?” before explaining that thanks to his frosty verbosity, his meeting took too long so they can’t have sex as she’s got to get back to open the cafe.

Siberia moves too slowly and feels unnecessarily complex. I didn’t find it particularly exciting, despite my unrequited love for both diamonds and Keanu Reeves. It was hard to work out the intricacies of the plot, with minor characters popping in then disappearing, the FSB turning up, and some South Africans. Even what I thought I understood while watching it, now feels impossible to follow.

But I liked that some elements were still left hanging, like its oft-repeated phrase “so sorry for the bird”, and yes, I googled. It’s a Russian toast, about a bird who breaks away from the flock mid-migration and flies directly into the sun, burning her wings and falling to the ground. A reference presumably to the benefits of communism, and of staying where they think you belong.

One big spoiler at the bottom ↓

Rent/buy Siberia  on vod/blu-ray/dvd from Amazon.com

Buy Siberia from iTunes US