You are here: Home / Trailers / No Good Deed Is Definitely NOT a Trailer For Deadpool 2 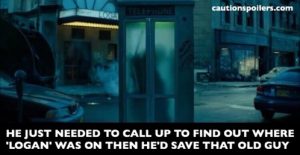 Deadpool was a huge R-rated megahit last year and we’ve just been given a short not-trailer to promote Deadpool 2. In the film, Wade spots an elderly man being threatened by a gunman, so he jumps in a nearby telephone box to get changed into his Deadpool outfit.

Sadly he takes even longer to get ready than me, and I have a tonne of make up to put on plus hair straighteners then I like to change my outfit four or five times before declaring I have nothing to wear AND I can do all this in a ladies toilet the same size as that phonebox. Ah well maybe next time eh, Wade.

You can see the short thingumy below. It’s called No Good Deed which leaves ample room for certain men I mean people to explain to us all, and probably also to Ryan Reynolds himself, why that’s a funny title.