You are here: Home / Trailers / “It Cost You An Arm & A Leg” – There’s A New Bad Batch Trailer For Us To Chew Over 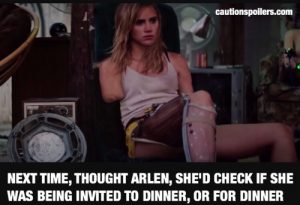 The latest Bad Batch trailer has just been released and KEANU DOES PUNS! (That just edges Gerard Butler doing the weather forecast in the upcoming Geostorm.) He also looks like Elvis during his Keanu period.

The Bad Batch is a dystopian horror-romance film written and directed by Ana Lily Amirpour, set in Texas – where criminals and other people who don’t fit in are exiled from society and left to fend for themselves in a desert wasteland populated by outcasts and, unfortunately, cannibals.

Suki Waterhouse is Arlen, sent into the desert and captured then part-eaten by the cannibals, who later skateboards to what could be safety in Comfort, a “haven” run by Keanu Reeves who impregnates women and hosts raves. (And who could be based on any number of people.)

It looks, frankly, mad as fuck and comes out this June. The reviews from the festivals have been mixed to say the least (a lot of the quotes on this trailer are one-worders which is always a worry) but I loved A Girl Walks Home Alone At Night and I love horror romances and I love Keanu Reeves so I’m still looking forward to it. (I’m not great in hot weather that’s the only thing.)

Check out the trailer below. (If you want to see the first trailer that come out a couple of months ago it’s here).