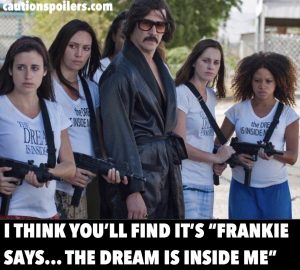 Arlen doesn’t look back much, except one heartbreaking time when she cuts the arm off a picture of a woman in a magazine, before aligning her stump with the paper limb and posing in a mirror. She allows herself to be temporarily whole again, though no one here will ever be whole again. They just stagger on through the parched landscape.

The Bad Batch is a scorchingly enervating and rather hypnotic journey that is spare in its language and harsh in its backdrops. In that sense it has a direct line from director Ana Lily Amirpour’s earlier brilliant vampire western, A Girl Walks Home Alone At Night.

And it wears its lack of subtlety like a (recycled) badge of honour in a way that reminds me of Nicolas Winding Refn’s Neon Demon, though Bad Batch is the better film.

The Dream runs Comfort, a functioning town for those outcasts who don’t want to eat each other.

There are lots of signs about Comfort, inside the compound and dotted throughout the Texan desert, all with double meanings. So many I wonder if The Dream was, in a previous life, a signwriter with a talent for gas-lighting impressionable (and impregnatable) young women.

Little wooden arrows direct you to Find Comfort. The Dream’s pregnant harem wear T-shirts emblazoned with The Dream Is Inside You. A sign states You Can’t Enter The Dream Unless The Dream Enters You. He clearly loves a pun (“It cost you an arm and a leg!” he tells Arlen about her journey to him and I was half expecting a self-satisfied chuckle at his own joke).

Comfort certainly functions effectively – The Dream’s explanation to Arlen of where the shit goes is half plumbing infomercial and half allegory. Though he fails to mention the most exciting news of all, that Comfort houses a fully functioning photocopier. (I’m honestly not making that up.)

But outside in the desert, a trudging chaos reigns. Everyone is just out to survive, deaths can barely be mourned. A kindness would be the chance of a trade, not being given something for free.

Soon after being kicked out of America, processed as bad batch and then locked outside its perimeter fence, Arlen (Suki Waterhouse) is captured by cannibals who take her to their ramshackle camp, chain her up, then saw off two limbs before bandaging the stumps.

Escaping on a skateboard she ends up at Comfort. The town has furnished caravans, noodle carts, even a doctor, and it appears that a kind of dystopian benevolent drug-fuelled dictatorship has sprung up. It’s a cult – dance music and lights throb through the night, as free acid pills are doled out – though to be fair everyone, including the limbless and the insane, are equally accepted. No one is a burden.

But considering the dangers of the desert Arlen has a surprisingly itchy remaining foot – soon she’s back wandering the trash-filled dunes, and on finding a mother and daughter cannibal team scavenging through the waste, kills the mother.

This murder is troubling to watch, and has, along with the vicious killing of the only other adult black character, caused controversy. Neither character poses a threat when they are killed. “I’m just trying to live out here same as you… We’re the same, we are” pleads the mom (Yolonda Ross), trying to find common ground with the skinny, grubbily vacant white girl in front of her. But she must know, seeing Arlen’s shoulder stump and prosthetic leg, that there will be little sympathy. It’s a revenge job and the only time in the film that Arlen seeks it.

The child’s dad is Miami Man (Jason Momoa), and soon he’s on the warpath. If you’re going to shack up with a cannibal, make it Miami Man. He actually shows some love to another human being (his daughter Honey), and after killing and eating a defenceless woman who screamed for mercy, washes the dishes.

Back in Comfort with Honey (Jayda Fink), Arlen’s mothering skills are instantly lacking though they did make me feel better about mine: “No one cares about you now. I could’ve just left you out in the desert” she says, using a pet bunny she has bought her as leverage for good behaviour, and soon after misplaces the child during a nighttime rave after dropping acid.

The film sets a slow, languorous and sweaty pace and doesn’t deviate. Despite its two hour running time it rarely drags, considering hardly anyone speaks (the pounding soundtrack blatantly explains as much as any dialogue ever could) and not much happens.

There’s almost no exposition. What brought us to this? Do any of the bad batch ever break back in to the cities? Surely there would be some kind of backdoor trade, even if only with a particularly entrepreneurial photocopier salesman? We get almost nothing here. The only clue is when Arlen proudly claims she’s heard of Cuba when Miami Man shares the bare bones of his past – her reaction hints that America has turned in on itself and then on itself.

Suki Waterhouse is well-cast, though her accent is all over the place. It’s often hard to work out her motivations, and while that could be down to the barely-there characterisation (no one is fleshed out) it could just as well be Arlen’s age and what she’s seen. Arlen is impulsive, childish, thoughtless and irritating, but she’s also stoic about where she finds herself, and creates her own agency.

I’ve seen The Bad Batch categorised as a black comedy, but though there are satirical elements there’s not much to laugh at, even bleakly. Mainly it is a stunning (in both senses) but starkly brutal experience. Human cattle scream for mercy and the sun beats down, as we watch with morbid curiosity and they with horror as an arm is flung on a grill, faded tattoos sizzling, fingernails still sporting chipped varnish.

The ending is almost full circle – there’s a resolution of sorts (though we never find out how The Dream keeps those slacks and open necked shirt so sparklingly white). And there’s almost a return to convention, as much as there ever can be.

buy / rent The Bad Batch on amazon video from amazon.com

buy The Bad Batch on dvd and blu-ray on amazon.com