You are here: Home / Trailers / The Bad Batch Trailer Is Here To Tempt Your Cannibal Cult Tastebuds 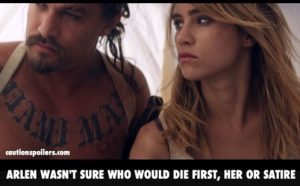 Just when you thought it was a while since you’d seen a cannibal ‘n’ cults film along comes a new one to make you salivate. The Bad Batch is the latest from Ana Lily Amirpour (director of the fabulous vampire classic A Girl Walks Home Alone At Night).

The movie premiered at the Toronto Film Festival (TIFF) last Autumn to mixed reviews, and should be released in June this year (in the US – no idea how long we’ll have to wait in the UK). It’s clearly a satire on modern America though I’m still hoping that by the time it’s released things won’t have got so bad that I will have to file my review under Documentary.

I am actually pretty excited about this film though I suspect I’ll come out thinking “WTF??”

See the trailer below and check out my review of A Girl Walks Home Alone At Night.