You are here: Home / Film Reviews / A Girl Walks Home Alone At Night 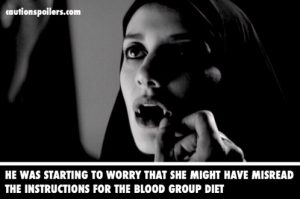 How refreshing to find a film about a girl walking home alone at night that doesn’t turn out to be (a) a rape revenge porno-for-nice-people flick, or (b) a rape revenge porno-for-creepy-people flick (the difference between these two sub-genres being usually determined in minor film festival award wins). Even if this girl bites necks (and fingers).

This is an adaptation by Ana Lily Amirpour of her award-winning short film about a female vampire.

It’s been described as an Iranian feminist western, though it looks as if it could be set anywhere. It has that western film vibe from those first scenes as Arash (a gardener-handyman type who looks like James Dean) finds a cat and walks off with it through the deserted daylit streets, past a ditch full of bodies.

It’s in black and white but the black is very black and the white is very white so there’s a modern rather than a retro look (think Inkwell Instagram filter). And the anti-heroine Girl stalks the nighttime streets thanks to the freedom offered her by her chador.

She reminded me of Betty Blue – the Girl has that tough vulnerability and likeable-unlikeableness that Betty had. They’ve also both got dark bobs and over-smudged lips (part-blood in the Girl’s case), and she wears a stripy Breton top and has a funky flat. Though Betty could only be said to be a vengeful force in the sense that her self-reproach results in her self-destruction (the only bits of bodies the Girl removes are other people’s).

Arash’s dad is a prostitute-using heroin addict whose drug dealer Saeed (who is also a pimp) comes for drug money owed, and takes Arash’s prized vintage car as payment. Arash works for rich It girl and party/plastic surgery lover Shaydah, and while working in her bedroom opportunistically steals her diamond earrings to use to get his car back.

Later Saeed ends up back at his flat with the Girl, where she reveals her true self, in typical fang-bearing style, by biting off his finger. And I sat there peering at the screen through my own (mercifully still 10) digits in horrified fascination waiting for the stump to emerge from her mouth – it does seem to take quite a long time to bite off a finger.

I’ve seem plenty of finger-removals in movies over the years. I suppose for a director it’s an easy win; the audience gets a yuck moment which will instantly have everyone looking down into their popcorn to see what’s really in there (have you seen The Hitcher?). And the actor gets to do lots of shrieking and stump-waving.

They can’t take up much of the special effects budget either (“just bend one finger down and we’ll secure it with sellotape and crush some red lippy on the knuckle, that’ll do!”) And it’s non-life threatening for the character, who can still do everything in the movie with 9.5 fingers, apart from, say, fast typing. (Though for poor Saeed the finger-chewing soon turns out to be the least of his problems. She really doesn’t do things by halves if you piss her off).

This isn’t a mindless slasher film though, and when the Girl finds Arash, for some reason she sees something in him that makes him worth preserving rather than puncturing. They listen to music in her flat and he survives without an attack, not bad going when I think back to the arguments I had with men in the 90s over whether Blur were better than Oasis (it’s okay they all survived, though none of them are particularly fast typists).

The Girl is much more than a cliched avenging feminist angel protecting women and children from the predations of men. She’s considerably more morally ambivalent than she first seems, and  doesn’t have trouble dealing with what she is (so often women, even vampires, are supposed to agonise over their misdeeds in a way that their male equivalents rarely are).

In fact she frequently just seems a bit bored, as if she’s killing time by killing people. Often simply beset by ennui, she slides aimlessly around on a skateboard she stole from a small child.

The vampire imagery is everywhere even when the Girl is not on screen, with plenty of mouth-touching and sucking of fingers by Arash and Shaydah.  And once the Girl has the skateboard she appears to glide along like an unearthly being. One victim literally gets it in the neck as the Girl covers him with her cloak like enveloping bats’ wings.

This is a film that never feels like an overstretched short, but rather like a full-length movie that must have been screaming to get out of its original short-form confines. Though it isn’t particularly frightening, partly because her victims (apart from the poor kid who lost their skateboard) are so deserving. (And I’d love to know if men find it more unnerving than women, or if I’m just hard as nails.)

The film’s “look” is completely arresting and stylised while also being weirdly realistic. I doubt there will be a sequel (next up for Amirpour is The Bad Batch, about cannibals in a post-apocalyptic wasteland) but I’d love to know what happens next for Arash and the Girl; and if they manage to create a workaround for the fact that one of them is a bloodsucking, skateboard-stealing killer (did I tell you she stole a child’s skateboard?).