You are here: Home / Trailers / The Met Office Has Fallen! A Second Geostorm Trailer Is Here & Gerry’s In Space… 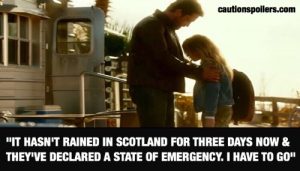 Check out my Geostorm review here. Plus my article If Gerard Butler Worked In My Office.

The satellites that control the weather on Earth start causing it to go crazy and it looks like – yes – a Geostorm. I know this as in the trailer someone who knows about geostorms says “GEOSTORM!”

In the new Geostorm trailer there’s a great shot of UN soldiers walking round someone in the street who has literally frozen to death standing up, which reminds me of what happens to visitors to my old home town of Newcastle when they see the locals out in tiny dresses and football shirts in the frozen depths of winter and think they’ll follow suit. (I don’t live there now. I was banished down South for drinking white wine spritzers and wearing tights, like, ONCE.)

Oh AND they kidnap the President too. In the movie, not in Newcastle. Though Jimmy Carter did visit in 1977.

Geostorm is basically weather p0rn with the Earth torn apart by extreme climate events. Gerard Butler is Jake Lawson, “Climate ISS Chief Cordinator”. I’m not entirely sure what a Climate ISS Chief Coordinator is, then again most of my own job titles over the years have been entirely made up (often by me) and undecipherable to anyone (especially me).

Jake has to talk to a Senate committee about what’s happening and his excuse for being an hour late is that “I literally had to fly in from outer space” and as an editor I am awarding him extra points – literally 1000s of them – for the correct use of “literally”.

Geostorm does look like every bad weather film ever made (that’s films about bad weather, not films about the weather which are bad, a completely different category), put together in one mega bad weather film – there are shades of The Day After Tomorrow, and the Deep Impact tsunamis, and probably the Great Storm of 1987 which hit the English Home Counties when a giant 100 year old oak tree fell over.

And the aftermath does look a bit like a rainy Whitley Bay seafront after a Bank Holiday drinking session with random bodies strewn everywhere and no one entirely sure what’s happened.

So check out the Geostorm trailer below. Weather disaster movies are one of my favourite sub-sub genres, and the added bonus here is Gerry in a jacket and tie, and a boiler suit, and a spacesuit, and I’m hoping also completely naked though I have no evidence of that last one beyond my own overactive imagination.