You are here: Home / Trailers / Gerard Butler In A Film About Weather Is All My British Dreams Come True 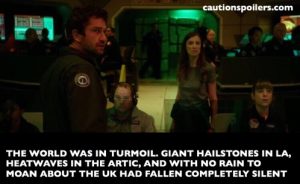 Check out my Geostorm review here. Plus my article If Gerard Butler Worked In My Office.

I’ve just watched this trailer for GerryStorm, sorry I mean Geostorm, with Gerard Butler, and I just had to share it with you.

In the film, satellites control the weather but then they start malfunctioning and Earth Weather is about to go really, really crazy. So Jake (Gerard Butler) has to go into space to save the world. Luckily there’s a woman up there with him! (Come on, this is Gerard Butler we’re talking about.) Ute Fassbinder (Alexandra Lara) is a space station commander so can surely sort out the weather and Jake/Gerry in about 10 minutes.

As a Brit I love talking about weather and I love British bad weather. Rain, mist, murk, grey clouds, or just general dreariness, a good moan about what it’s doing to my hair is very cathartic.

I also love feature films about bad weather (though not ones about tornados as over here we are a bit pathetic about twisters. We don’t get many and the ones we get are weeny and result in two roof tiles being blown off somewhere in the Midlands, and then the media goes completely mad about the two missing roof tiles and climate change and then people who never fly anywhere start looking really smug).

I especially love the scenes in films about bad weather showing what’ll happen to the Royal Family, like in The Day After Tomorrow when the RAF flies someone up in a chopper to Balmoral in Scotland to rescue the Queen then he freezes solid when he tries to climb out (to be fair that can happen any day in the North. I should know, I’m from there. The proper North, not, you know, Manchester).

Though we all know that actually the Queen would survive any natural disasters. She’s the queen and that’s the law, and she’s about a billion years old (one day they will find her granny preserved in amber in a South American mine), and she’s as tough as old boots and could stop an encroaching Big Freeze with just a look. (Actually if you’re American, the Queen scenes are the equivalent to the ones of Morgan Freeman looking presidential but a bit damp at the end.)

Anyway back to Geostorm! Of course Gerard Butler is the perfect choice as being Scottish a little bit of rain isn’t going to phase him (by “little bit” please remember rain is relative and this is Scotland we’re talking about).

Check out the Geostorm trailer below. The Dean Devlin-directed film is released in October 2017. From what I’ve heard it test-screened poorly so scenes have been re-shot, and it’s been hanging around for a while.

Though to be honest I totally love disaster movies whether they are brilliant, or terrible (or as I like to call those ones, disaster disaster movies). So expect a lot more about GerryStorm from me between now and its release.