You are here: Home / Trailers / Finally A Trailer About The World’s Top Assassin! No Not That One 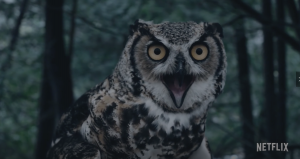 They killed his owl, and now he’s mad

Mads Mikkelsen is Duncan Vizla, the World’s Top Assassin (Ret’d), brought out of retirement because someone killed his owl.

I’m kidding about the owl bit. But there is the World’s Top Owl in the trailer.

No. He’s brought out of retirement to deal with a group of young hitmen, who steal his car and… They don’t really. But whatever they’ve done he’s pissed off. (Please don’t show him this article, especially the owl bit.)

Mikkelsen looks like a cross between John Wick (in my dreams) and Charles Bronson (in Death Wish), and he does seem to be a grittier, messier, more morally ambiguous World’s Top Assassin than Mr Wick. Plus he has LASER HANDS. 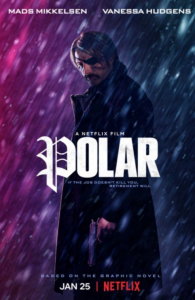 A very Wick-like poster for Polar

The film is based on a graphic novel and looks like Wick-ed fun (sorry but I can’t help myself).

If it’s a success I imagine we’ll be getting Vizla vs Wick: Requiem, which is not quite Mike Banning vs John Wick: Requiem but will do. (Somehow Duncan vs John: Requiem doesn’t sound very hard, like a “who can make the best quinoa” competition between two competitive middle class dads.)

Mikkelsen is having a chilly January, with his extreme survival film Arctic out next month – what a great double bill the two films would make.

Check out the trailer for Polar, below. It also stars Vanessa Hudgens, Katheryn Winnick and Matt Lucas and is directed by Jonas Åkerlund.

Polar is coming to Netflix US on 25 January, and hopefully to the UK at the same time.