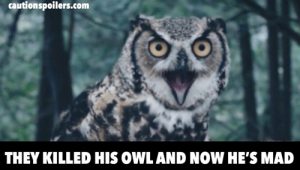 I hate to admit this but the only time I laughed out loud during John Wick 3: Parky Bottom, I mean Polar, was when something terrible happened to the cute dog.

Based on the comic series of the same name, Polar mixes dark brooding and methodical kills with trashy, flashy, searingly bright gunfests to weird and often baffling effect.

While it seems to be aiming for a cross between John Wick and Assassination Nation, it sadly never reaches the heights of either.

Having said that, there’s humour, intentional and otherwise, which combined with a determined and admirably straight-faced performance from Mads Mikkelsen as Duncan Vizla, The Other World’s Top Assassin, meant that I didn’t watch it entirely through my fingers.

Tiptoeing through the literal and metaphorical wreckage while only mildly mocking himself, at times Mads even out-Wicks The Actual World’s Top Assassin with his frequent bottom-baring, at one point having sex with one foot up on a table for traction and his underpants stuck round his ankle.

It’s a scene both more real and more endearing than Wick, who once had a massive fight with Miss Perkins while wearing only boxer shorts and a T-shirt and absolutely nothing popped out whatsoever (believe me, I checked).

Vizla is so hard he shoots someone dead while standing outside in the snow completely naked, and later takes out about 30 opponents by shooting green lasers out of his fingers.

Duncan Vizla certainly looks like John Wick with his longish hair and stubble, and when he’s not naked he’s clad in a black suit and a black tie, standing in the shadows. He even speaks Russian! The little dog is cute, and at least this time the pet-owning assassin does some research, buying a DVD on how to look after a dog (have you still got the receipt, Duncan?).

Roll-up constantly hanging out of his mouth, he’s even got his own nickname designed to terrify his opponents with its very mention: though he’s the Black Kaiser rather than Baba Yaga or the Bogeyman. (Why they didn’t call him the Rizla Vizla, I. Do. Not. Know.)

Vizla is two weeks off 50, and about to retire. The tone – well, one of them – is set early as he undergoes his retirement health check, with a doctor who fancies himself a comedian (or maybe the scriptwriter did) checking out old bullet scars and giving him a prostate examination. Then it’s off for a finance check up, because even assassins have a pension.

In fact it looks as if assassins have a pretty good final salary deal, possibly because so few make it to retirement. On his birthday he gets $8 million from the pension fund. But what he doesn’t know is that if he dies before that day the money all reverts to Damocles, the shady organisation that employs him.

They chase him round the world, though most of the time he’s holed up in his snow-covered Montana cabin, smoking, drinking, and getting to know Camille (a sweet, sensitive but underused Vanessa Hudgens), the cute girl renting the cabin across the lake from him.

She’s a would-be photographer, taking pictures of enigmatic owls in the snow. Their blossoming friendship doesn’t stop Vizla shagging Average Assassin Sindy though, her naked breasts squashed against the window pane as we watch from outside.

The scenes involving Damocles’s hit squad are garish and neon-bright, from the sparkling sequinned pants to the purple hair to the brightly coloured soft furnishings in motels and the houses they break into, during their search for their target. The deaths are plentiful and over the top, the use of bullets frankly extravagant.

Vivian (Katheryn Winnick) is directing operations. Glamorous and brutal, she does her best to keep the mini assassins on a tight leash, but they’re not the brightest: “I can’t remember all that!” one tells her on the phone when she’s just given him a long, menacing warning and ordered him to remind the others what will happen if they don’t finish the job.

Polar comes in at nearly two hours, and they could have cut 20 minutes. It’s sometimes overblown fun. There are some good lines, and what’s not to love about a gangster being crucified with a nail gun, that last shot to the head preceded by a nail in his nether regions and a drill through his forehead, all to a bouncy Russian folksong soundtrack? And the perils of plastic windows are made clear when someone tries to escape by throwing themselves through one only to bounce back into the room.

But going from Blut’s exaggerated mannerisms and brightly coloured suits, or watching the group of comedy assassins goofing and shooting, to Camille talking about what sounds like a sexual assault, just doesn’t work.

This is an ultra-violent comedy (not just shootings but horribly graphic torture too, plus plenty of gratuitous nudity). In a sub-genre like that, which is hard enough to get right at the best of times, making the jokes work against the pain isn’t easy. The heart of the matter is that Polar isn’t sure what kind of comedy it wants to be. Satire? Teenage gross-out? Clever parody?

Director Jonas Åkerlund throws everything into the mix and it’s a mess. Struggling to get out is a dour but bleakly witty John Wick rip-off, or a daft comedy John Wick rip-off, or a brash, loud, stylised comic book story, and possibly several others. Mikkelsen, Hudgens and Winnick are largely wasted. It’s a shame because with the John Wick franchise cleverly ending before it descends into parody itself, there’s room for some laughs at that genre’s stylish and occasionally po-faced expense.

Poor old Vizla. Really all he wants to do is retire, preferably with a pet that has survival instincts as good as his own. It remains to be seen whether we’ll get an even chillier Chapter 2.

Polar is available on Netflix now.

Watch the trailer for Polar: