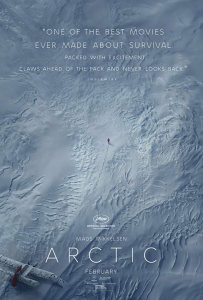 Mikkelsen plays Overgård, a man left stranded in the arctic after his small plane crash lands. Mikkelsen has been lauded for his portrayal, and it’s one I can’t wait to see.

Sadly I missed it at the London Film Festival last autumn as I had an injured foot, an excuse which even to me sounds increasingly pathetic, the more I see of Overgård’s experience – the construction of his SOS message alone looks an utterly exhausting task.

The trailer is full of situations going from bad to worse, and there’s a real sense not just of the isolation and physical hardships, but also of Overgård’s personal duels between stoicism and defeat in the face of such heart-sink moments.

Arctic is directed by Joe Penna and written by Penna and Ryan Morrison, and co-stars Maria Thelma Smáradóttir. It has a US release date of 1 February, though I can’t find a UK date yet – I hope it gets a cinema release over here, partly because such a vast, empty canvas requires a large screen, but also because cinemas in Britain are so bone-chillingly freezing it will help set the scene.

Check out the full trailer for Arctic, and the teaser trailer, both below.