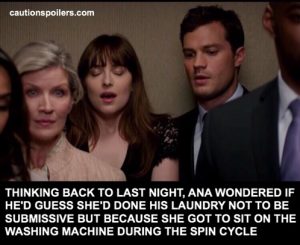 There’s a new 50 Shades Darker trailer just been released, to keep us just on the edge until the film itself – the sequel to 2015’s smash hit 50 Shades of Grey – comes out on 10 February 2017. And the best news is… KIM BASINGER IS IN IT!

Anyway yes they really are releasing the movie just in time for VALENTINE’S DAY, to make everyone feel even more unloved and inadequate than usual. So when all you get is a padded card with teddies on it and a box of Ferrero Rocher, and maybe a new Hoover, you can then cheer yourself up with a trip to the cinema to watch Christian Grey and Anastasia Steele shagging sexily several times and with some other stuff happening in between. Maybe. But never mind because KIM BASINGER IS IN IT.

In the meantime check out the trailer below – 50 Shades Darker again stars Dakota Johnson and Jamie Dornan, with Bella Heathcote as Leila Williams, and Kim Basinger as Elena Lincoln. This film and the third in the trilogy, 50 Shades Freed, are directed by James Foley. I will definitely be going to see it, because KIM BASINGER IS IN IT.