You are here: Home / Trailers / Cats trailer: old fashioned yet from the future, not unlike real cats

Well that was different.

I’ve just watched the Cats trailer, which has caused the internet to explode today. I thought it was half creepy & half interesting. Some scenes worked well (I liked the choreography and of course the singing), and some just looked bizarre (the tails of the unexpected).

I predict a singalong version will be doing great business in a year. Who knows, one day they might make a stage version out of it.

Though where the hell was Bagpuss?

(I’ve also got a poll going over on Twitter asking whether I should make my cat or dog watch it, and let’s just say I think people are letting their dogs vote.) 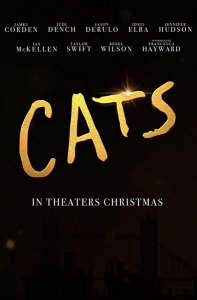 Cats is out in the UK and the US on 20 December. Watch the trailer below – or click here for the Cats: A Look Inside featurette released earlier this week.