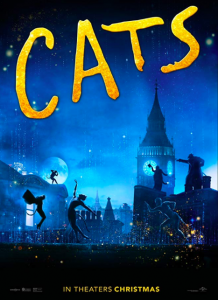 I am very familiar with cats: the Good (cuddly, make great Instagram posts, the bug they can give you that makes you sexier); and the Bad (clawing your tights when sitting on your knee, peeing all over your carpets, making you feel like an intruder in your home when you want to sit on your own sofa).

I thought I’d seen the Ugly too – reanimated Church in Pet Sematary – until I watched Cats.

The film isn’t entirely awful; few films are. But the bizarre design choices for the cats themselves are so overwhelming they overshadow the good bits (and yes there are some!)

The problem with Cats is that what’s wrong with it is almost impossible to get past – the way the animals have been imagined is so off-putting that anything positive (*waves at Taylor Swift*) is lost. Or, in the case of Jennifer Hudson’s final rendition of Memory, ceases to work.

Too human to be cats, they look like naked people with fur, which makes their feline behaviour – rubbing up against each other, licking – look excessively kinky for a U certificate movie. Cat onesies would have been better. The names are as bad, though responsibility for that falls on both TS Eliot (who wrote Old Possum’s Book of Practical Cats, the collection of poems on which Lloyd Webber’s musical is based) and the passage of time, with Rum Tum Tugger now sounding like a sexual practice listed in the Urban Dictionary.

Their long, thick tails pop up vertically on screen, like giant furry, bendy penises. And though people keep talking about the furry boobs (Taylor Swift’s wobbly-bosomed shimmy is something to behold in an otherwise stage-shaking musical number) it was the furry bums that got me, along with the human hands. Their feline get-togethers look like a fetish club and made me think I should probably get out more. Or maybe never go out again.

It’s not just the cat costumes; it’s also the scale. Because they look like people, not cats, whatever size they are in relation to other objects (lampposts, doors, beds) they still look too big, too small, and simply not cat-shaped. And no one looks soft and fluffy. I wouldn’t want to stroke any of them.

It’s hard to say who has the most extraordinary moment: Rebel Wilson as Jennyanydots being unzipped from her own furry cat skin to reveal magenta satin underneath, followed by a kitchen dance involving tiny marching human-cockroach hybrids (reader, she eats one); Jennifer Hudson as Grizabella, layered in furs, dragging herself along an alley; Ian McKellen as Gus the Theatre Cat, lapping from a cat bowl; or cat-faced and fur coat-wearing Old Deuteronomy (Judi Dench) looking like something out of those intergalactic space gatherings that popped up every so often in the rebooted Dr Who.

The only judge at the Jellicle Ball, Deuteronomy is a feline Simon Cowell, though at least their competition – the Jellicle Choice – is honest, with the sob story more important than the singing and dancing when it comes to choosing the winner.

The comedy is woeful, the kind of cat jokes that critics would prefer to be left out of the actual movie so we can use them in our reviews; and the characterisation is almost non-existent, mainly as we hardly spend any time with anyone.

Ultimately, the shortcomings in the plot and lack of characterisation mean the wacky production design has nothing to hide behind. The story is basic. Victoria (Francesca Hayward), the abandoned white cat, is introduced to the Jellicle cats, all hoping to be chosen by Deuteronomy to be sent to the Heaviside Layer and given another life.

(My 7 year old, who I made come with me and yes I know I’m a bad mother, kept asking what a Jellicle cat is and even though there’s a whole song about it I’m still not sure. A bunch of stray cats?)

Macavity – Idris Elba, who at least gives it his all, even if his all is maniacally terrifying – wants to be the Chosen One, and magics people away to reduce his competition. Mr Mistoffelees (Laurie Davidson) looks like he’s popped in from Dr Seuss’s The Cat In The Hat. Skimbleshanks the Railway Cat (who is one of the film’s highlights – I loved his song and tap dance routine) could be a member of an animal Village People. James Corden as Bustopher Jones is no worse than anyone else (he always plays himself anyway, and is never as awful as people like making out).

Cats is like a spinning magnet, both drawing us in and repelling us. I can see it turning into a cult favourite, watched by generations of drunk students by night and studied in learned tracts by day. There is certainly something gobsmacking about the whole thing. 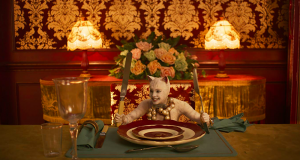 I wouldn’t say it’s audacious; more it feels like a film developed and made in a vacuum, where they started off down one route then felt their only option was to continue. The whole visual premise is simply fantastically odd. Director Tom Hooper should have leaned into its stagey origins with actors in literal cat costumes, or simply gone for the animation approach.

Still, like Holmes & Watson, a similarly panned movie that came out this time last year, while it is mostly jawdropping there are still a few good moments, to be relished and savoured like a stinky five-day-old fish rescued by James Corden from a bin.

The songs are terrific, and some of the performances break through the madness.

Taylor Swift is excellent as Bombalurina, descending from the sky draped across a crescent moon, dusting catnip on the Jellicles below. With perfect timing and a great sense of gleeful ambivalence towards the fear Macavity engenders in the Jellicle cats, she steals the show even though she’s barely in it.

Royal Ballet principal Francesca Hayward adds a sprinkling of stardust to the dancing, and does a nice line in vulnerability as an actress. Her singing voice is sweetly angelic though she sounds weaker when she’s up against Hudson. Robbie Fairchild as Munkustrap also somehow transcends the craziness and seems to be most at home in his feline skin.

Hayward and Hudson are meant to be the emotional heart of the movie, with the abandoned Victoria persuading Grizabella, the broken outsider and ex-glamourpuss, to sing Memory once more at the Jellicle Ball. It’s a musical performance that’s drenched with emotion but doesn’t fully work in its bizarre setting.

Deuteronomy chooses her though, putting her in an ornate balloon and sending her off into the sky for her magical new life, though it looked like certain death to me.

Still, she’s the obvious choice, and I will never not support once-glamorous older women getting a second chance.

Note: We saw this on Christmas Eve. I checked with the cinema and we were watching the original version, not the new version with improved visual effects which was released this week.