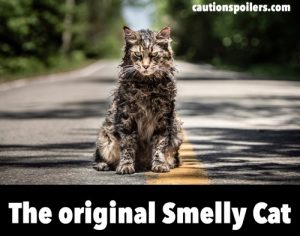 Nothing sums up the difference between city and country in Pet Sematary better than the story of the reanimated prize bull.

The people of Ludlow in rural Maine combine practicality and belief in old legends, encapsulated by the tale of a local farmer who used a supernatural burial ground to bring back his most valuable animal.

It’s an incident from Stephen King’s novel, though in this adaptation it’s illustrated with an old newspaper clipping that Louis Creed, relocated to the area, finds online.

I’m about two-thirds of the way through the book (my first Stephen King!) and while screenwriter Jeff Buhler has found some interesting ways to include witty details like reanimated livestock, a film of around 100 minutes means a lot has been left out.

The book takes care, and time, building up the link between land and people, creating a ground-up sense of menace – and while usually I have no problem separating the source material from the film adaptation, here I wish I’d waited to start reading.

This Pet Sematary works as a straight up, jump-filled horror movie, but it’s not as layered as I was expecting, and the scares are instant rather than ominous.

Dr Louis Creed (Jason Clarke) and his wife Rachel (Amy Seimetz) move from Boston to Ludlow with their two children: Ellie, and their toddler Gage. Louis is a man of science, refusing to sugar-coat regardless of audience: “Do you remember that talk about metabolism?” he asks Ellie, who is only 8.

The land they’ve bought is extensive and includes a children’s pet cemetery in the trees behind the house – a spooky procession of local kids in animal masks marking the burial of a pet dog is an early indication that there’s something in them there woods.

Behind the cemetery is a huge deadfall of brushwood and logs, and behind that land owned by Native Americans who have long since left on account of something bad in the soil.

The Creeds’ house is on a road bedevilled by speeding mega-trucks. When Ellie’s beloved cat Church is killed, their elderly neighbour Jud (a warm John Lithgow) takes Louis and the dead cat beyond the deadfall, to land rumoured to bring bodies back to life.

Soon Church has returned from the grave, stinkier and eager to kill (luckily only small mammals and birds). But when the next victim of that road is one of the Creed children, Louis’s lack of belief in the afterlife pushes him towards a supernatural solution.

This is a film about grief and loss, and facing up to death. For all his patronising ways, Louis is terrified of death because it really is the end for him.

I’m going to assume for the purposes of this review that you’ve watched the spoilery trailer, so if you want to see the movie without knowing anything then imagine I’m the spooky woods and you’re anyone but Louis Creed, and run back to your own version of Boston.

That trailer is spoilery not just because it gives away a major plot divergence from the book – it also ruins what looks like a deliberate teasing within the film.

In the novel, it’s Gage who is killed by a truck. In this film it’s Ellie. The change works very well on screen and gives the character considerably more scope (helped by Jeté Laurence, the exceptional young actress who plays Ellie).

A reanimated toddler can kill (they can be pretty brutal alive too: “you’re ugly Mummy!” followed by some well positioned Lego on the floor can shred a mother’s soul and her feet, I can attest) but the idea that there’s some kind of thinking process going on behind the dead eyes and dead skin works much better on screen with an older child who has shown herself when alive to be intelligent and thoughtful.

Dulled and mean, her hair as matted as what’s left of her brain, nevertheless there’s still something of the original in the returned Ellie. The relationship between her and Louis has always been central, driving his catastrophic choices, and even dead she looks to her father for reassurance.

We’re teased throughout that it’s Gage who will die. The toddler hardly appears at first, so we fear he’s wandered off, especially early on when Rachel goes alone to look for Ellie in the woods. Even the immediate build-up to Ellie’s death positions Gage as the victim. It would be brutally amusing, if we didn’t know.

Stylistically, the woods at night look deliberately artificial. The darkness is rich and blue, the rising mist is thick, the water they wade through looks clean – in fact it all looks spookily spotless. Presumably this artifice is meant to add to the dreamlike quality of Louis’s experiences there; instead of trekking through the fields into the trees, he steps from a door in his basement and is already there. His feet are still covered in dirt next morning, illustrating the blurred line between nightmare, dream and reality, and how the land is creating that. I don’t think it works, though it looks beautiful.

Those style choices set the film at another remove from its audience so I was never really scared (and I’m easily scared, one of the reasons I’ve not read any Stephen King until now).

The film isn’t long enough to build the sense of ancient rituals and myths weaving land and locals together, of the soil’s sourness exerting an evil control. (I’m usually banging the drum for 98-minute movies so if I’m saying this is too short, it’s too short.)

Directors Kevin Kölsch and Dennis Widmyer include plenty of traditional frights and tropes, and the ending works in the same way. It’s entirely expected by then, and meanly funny, but without giving the game away I was very unengaged by this time.

Still, the ease with which we make children monsters (or let them believe themselves to be) is well-handled: young Rachel for her involvement in her sister Zelda’s death; Zelda, twisted and dying in bed, hating her sister for her good health; Ellie the reanimated corpse. They’re not of course; it’s the adults – Louis, and Rachel’s parents – with maybe a bit of help from the Wendigo, a demon who walks the woods and can be heard in the trees.

Louis’s reliance on science pushing him to invoke the supernatural is one of those ideas that seems paradoxical but makes perfect sense (helped by Clarke, who is excellent – as he was in The Aftermath, playing another man, another Lewis in fact, who both loved his wife and lorded it over her with superciliousness and hubris).

Clarke is always magnificent at those tiny details that instantly show us the man for what he is. Early in Pet Sematary Louis is explaining something to Ellie and finishes with an upwards-intoning and very smug “mmmm?” It sums him up utterly.

Rachel’s request to Louis about how they tell Ellie that Church has been run over (“Just anything but dead”) aims only to slow death’s incursion into the children’s lives, so they don’t suffer as she did over Zelda. Despite Rachel’s initial phobia over the D-word, it’s clear that long-term she has the better chance of moving on.

But Louis has no faith, not even in the way irregular believers often comfort themselves and others when someone dies, with illogical talk of angels or the deceased looking down from clouds: there’s literally nothing afterwards for him.

For Louis, when you believe death is the absolute end, then dead isn’t better.

Check out these interviews with the Pet Sematary cast, directors and screenwriter.