You are here: Home / Interviews / Pet Sematary interviews: “I didn’t think you could train a cat!” co-director Dennis Widmyer 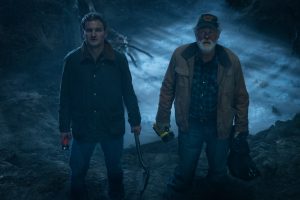 Jason Clarke as Louis and John Lithgow as Jud

I’m taking my mind off the apparently terrifying horror remake by congratulating myself that at least I can now I can spell “Sematary” the way Stephen King wanted, without having to check every time.

Pet Sematary, directed by Kevin Kölsch and Dennis Widmyer, is released in the UK on 4 April and in the US on 5 April. The story follows the Creed family, who move to rural Maine in search of a better life – only to discover there’s a pet cemetery in the woods behind their home. And then their pet cat dies…

It has just premiered at the SXSW film festival in Texas, but if you weren’t there (neither was I!) these interviews and featurette should tide you over. 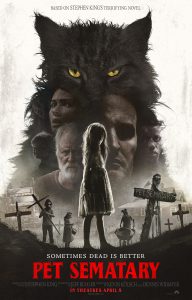 And don’t miss screenwriter Jeff Buhler on loss and grief, and directors Kevin Kölsch and Dennis Widmyer on going right back to the source material:

“We’ve gone back to the book and we’ve come up with some great, fresh new takes on some of the scariest elements of that story”, says Kölsch.

(You can watch the two trailers and check out images from the movie here.)

Right, I’m off to embark on my very first reading of a Stephen King novel, at the grand old age of 47 – that’s about 40 years’ later than most of you.