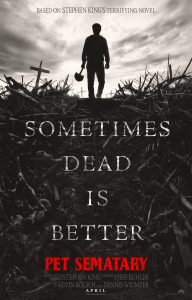 And let’s hope that tagline doesn’t come back to haunt them.

Yes the original Smelly Cat is BACK!

I didn’t see the original, 30 years ago, as I wasn’t really a pet person then. Also my mum would have banished me if I’d gone to see a film with that many typos in the title.

The Creed family move from Boston to Maine – to an isolated house in a wood, in fact – but when their cat dies and Louis buries it in the woodland pet cemetery behind their new home, terrible things start to happen.

The first trailer, released last October, is big on drumbeats and people returning from the dead extremely slowly. I’ll certainly not be moving to Maine any time soon though (and Boston’s lovely!)

Check out images and posters from the film:

Pet Sematary is directed by Kevin Kölsch and Dennis Widmyer. It premieres at SXSW film festival on 17 March and is released in the US and UK on 5 April 2019.

By the way – the new film differs from the last one (and from the book) in one big respect, and it’s revealed in the trailer. If you don’t want to know, don’t watch it!

Watch the NEW trailer now (scroll down for the first trailer):