You are here: Home / Trailers / The “Bait” trailer is here, and I will be carping on about it all summer 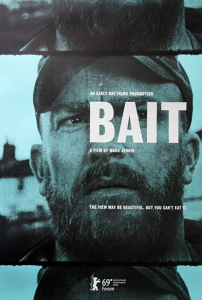 Okay that’s the only fish pun as I used them up in my review of Fisherman’s Friends.

I saw Bait last week and I can confirm it is just as extraordinary (in a good way) as the quotes on the trailer say it is.

There’s a magic to writer-director Mark Jenkin’s stunning film, combined with grittiness, thanks to his decision to shoot it on a vintage 16mm camera using black and white Kodak film that was then hand-processed. It’s shocking and funny, and ultimately very modern, casting a vintage net over a contemporary issue.

Bait looks and sounds like a 1950s or ’60s movie, but is set in a present day Cornish fishing village – a community trying to cope with change that feels more imposed by rich outsiders than something allowed to develop organically over time.

Fishermen and brothers Martin (Edward Rowe) and Steven (Giles King) have had to sell their family cottage to outsiders. Steven now uses their late dad’s boat for sightseeing trips, and Martin has to try and fish without one, while saving for his own. Tensions mount between and among residents new and old, and holidaymakers.

Bait also stars Chloe Endean, Simon Shepherd, and Mary Woodvine. You can catch it at the Edinburgh International Film Festival on 21 June, and when it’s released on 30 August nationwide. There are also previews including Q&As with director Mark Jenkin in July and August – peak holiday cottage season! You can find out where they’re happening, and check out Bait‘s UK cinema release schedule, on the BFI site here.