“Emotions have no place in business” says hotshot London music executive Danny (Daniel Mays) and there’s your Britflick red flag right there. Fisherman’s Friends ticks so many boxes it makes me wonder if there’s a secret list of British film industry definites and nice-to-haves, with any funding dependent on a 75% hit rate. 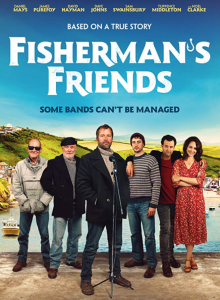 Based on a true story, Fisherman’s Friends follows Danny’s attempt to sign a Cornish fisher-folk group and make them stars, despite misgivings and outright hostility from supercilious London music people and indeed the band themselves.

Along the way there’s romance, unexpectedly high tides, an evil businessman, cameos from Eamonn Holmes and Ruth Langsford, disaster, triumph, and lots of beer (none of that fizzy lager though).

This tale of herring-do (sorry) and having a sense of plaice (not sorry) isn’t exactly turbot-charged (sorry, not sorry, sorry) and the temptation is to cock a snoek at it (never apologise never explain, and that’s my final word). It’s frequently contrived, as locals and Londoners carp at each other. But it also has just enough emotional depth to warm the cockles of your heart, thank cod. (Wait, what?)

The Cornish villagers aren’t impressed by London music men, London money or indeed London cars. When Danny and his friends first arrive for Henry’s stag do in the groom’s new BMW, trying to navigate a narrow street the wrong way, they come across Alwyn (Tuppence Middleton) in her 2CV. Her dry comment “how short sighted of a 17th century town planner not to account for that cock extension” sets the scene for local pointedness (and drew noisy guffaws from the elderly ladies in the screening with me).

Danny doesn’t rate the Fisherman’s Friends band at first, watching them in their regular slot singing in a row on the harbour front, like Take That on their 28th comeback tour. They’re singing traditional fishermen’s sea shanties, cheerfully upbeat tunes that often contrast with the sadness of their lyrics.

He only offers to represent them because his boss Troy (Noel Clarke) and colleagues Henry (Christian Brassington) and Driss (Vahid Gold) prank him into telling the band that they’re going to be signed.

But then his music industry mates head back to London without him (why?), and Danny starts to wonder if he could really make something of this bunch of mostly bearded, mostly middle-aged men. They already have expert knowledge of the sometimes deceptively calm, sometimes raging sea, which parallels the industry they may end up entering.

Danny’s extended stay in the village leads to him falling for single mum Alwyn, whose deep-seated loneliness matches his own. Central to the boat and the band is her father Jim (an excellent James Purefoy, who in my mind is permanently 30 but turns out now to be grey haired, grizzled, bearded, and – in his chunky jumper, donkey jacket, and brooding stubbornness – quite simply the hottest grandad in Cornwall).

Jim, like many British villagers in movies, is stubborn and defensive; though Purefoy makes him rounded and sympathetic, as Jim realises that while singing ancient sea shanties helps them make sense of local tragedies ancient and modern, he’s never addressed the pain he’s suffered in his own life.

The singing never sounds better then when they’re in the acoustically perfect village church or outside on the fishing boat, heading out to sea. It’s rather moving, hearing men of all ages break into song as the nets and traps are thrown overboard.

A singalong in a London pub, where the visiting band break into What Shall We Do With The Drunken Sailor, starts off as cringeworthy as the infamous “London underground scene” in Darkest Hour but soon had me entirely engaged (with Purefoy’s final little gestures ensuring the scene finishes properly rather than everyone standing there looking embarrassed before cutting to the next shot).

As if life on the ocean waves – with dwindling catches and jobsworth coastguards checking up on them – wasn’t tough enough, they regularly subject themselves to the local pub quiz, as delivered by Maggie (Maggie Steed). I’m going to one next week (“we need you for the film questions!” they declared worryingly) but at least if there are any music-related ones I now know who had the first posthumous No.1 hit in the UK, and who has spent most weeks in the UK music charts.

It’s not a particularly pretty film, which may be because it is deliberately focusing on local industry – it looks best when the men are preparing to go out to sea, or are out on their boat, or standing on the harbour wall with a vast expanse of water behind them.

Fisherman’s Friends is simply too by-numbers (and too long) to entirely succeed, despite its winning performances, the sense of history and – of course – the singing. Director Chris Foggin tries hard to prevent the film from falling into whimsy but often the mini dramas feel shoehorned in. The pub is going under, and the father of Henry’s new wife wants to buy it. His perfect hair and expensive tan make it obvious he’s unlikely to use his wealth to shore up a loss-making business even if the village needs it.

There are plenty of ups and downs before the Fisherman’s Friends triumph. Though Londoners fall for their charms in that pub, the capital’s music executives are harder to crack: from Island Records boss Leah (Jade Anouka) to her nose-ring wearing underlings, watching a group of fishermen singing a folk song that turns out to be about prostitution in their open plan office.

The script is gently amusing rather than funny, and the actors sometimes have to force the laughs from their lines. Though while the locals teasing the visitors wears thin, some jokes really hit the spot: “He’s getting quite badly burned. So take your time” deadpans the radio operator to the rescue helicopter when one of the stag do friends paddles way too far out to sea on his board as the sun beats down.

And I now know that emotions do have a place in business. I also know all the verses to What Shall We Do With The Drunken Sailor, including the rude ones.

Watch the trailer for Fisherman’s Friends: