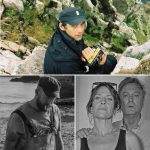 “There are shots in the film that I know were taken from rolls of film that I must have been processing when I was wearing a woolly jumper, because I can see the little bits of fibres.” Mark Jenkin on his film-making process. Bait, Jenkin’s beautiful and jolting film, looks at the gentrification of a… END_OF_DOCUMENT_TOKEN_TO_BE_REPLACED

Okay that’s the only fish pun as I used them up in my review of Fisherman’s Friends. I saw Bait last week and I can confirm it is just as extraordinary (in a good way) as the quotes on the trailer say it is. There’s a magic to writer-director Mark Jenkin’s stunning film, combined with grittiness,… END_OF_DOCUMENT_TOKEN_TO_BE_REPLACED