You are here: Home / Interviews / Jessica Whitehill On Screenwriting Plus Humanity & Humour In “The 12”

Screenwriter Jessica Whitehill wrote The 12, a bleakly witty church invasion thriller where a tiny congregation learns its own strengths when faced with a terrifying but very human gunman.

The feature-length movie was shot in only five days by her husband, director James Whitehill. Jessica has worked extensively in theatre and film – her script for SVEN won best sci-fi screenplay at the Los Angeles Film Awards in 2017.

Check out my interview with Jessica below, and with The 12 director James Whitehill. You can also read my review and watch the trailer.

The 12 seems to me to be about not putting your faith in fallible humans claiming to be conduits for God, and instead having faith in the fallible humans all around you. Do you see it as anti-organised religion? Or is it a story about friendship that could have been set anywhere? 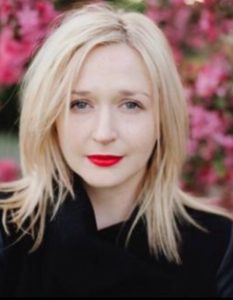 It’s ultimately about humanity and how no matter what race, religion or political ideology, we are all fundamentally flawed human beings who need to learn to put differences aside for the greater good.

It feels like Christianity gets a bad rap these days, and I wanted to show that churches are still full of people trying their best, sometimes failing, and that’s okay.

It’s quite a large cast, mostly all in one location for the whole film – what challenges did that create for you as the writer?

Over the years, I’ve written numerous stage plays for large casts and writing this screenplay was a similar process. The biggest challenge was making sure each character had precise “stage directions” within the script so that James didn’t have a logistical nightmare on set.

There were also several script rewrites once the church location and five-day shoot was confirmed.

When you’re writing a screenplay do you start with fixed ideas about characterisation and each person’s prominence in the story, or do they take on a life of their own on paper? 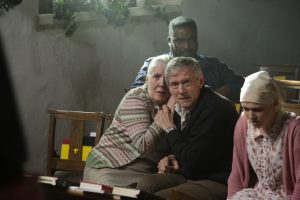 The 12’s congregation, and all of us watching 90s comedies now deemed problematic

My character development process is quite rigid, however I actually find this gives me more freedom in the script writing stage. I place my set characters in a scene and allow them to improvise.

It’s hugely satisfying because they have stopped being my creation at that point and have a voice of their own and yes, some characters who start out as bit-parts can often force themselves into a main role!

I enjoyed the deadpan humour in The 12 (particularly Ian and his parenting). The snarky asides are so <national stereotype alert> British that I was surprised to discover you and James are Australian. Did you always want to have some comic relief in the movie or did that element just evolve as you wrote it?

The comic relief happened very organically and I guess is partly due to my dry, Australian, sense of humour. It’s been hugely rewarding to see the audience’s reaction to the mixture of emotions, and yes, I think many people will be surprised that even in a dark situation, there are moments where it’s okay to find the humour and have a laugh.

When Caleb (the hostage-taker) first enters the church, some of the things he said made me think he was meant to be God (the Old Testament, angry kind), raging at his wayward believers for relying on false gods (Pastor Mike). Was that intentional? (I admit I love a bit of religious allegory so I may be projecting.) 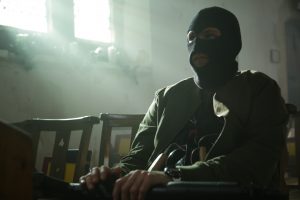 Caleb, or me at church hoping I won’t have to do that “peace be with you” shaking hands thing

I like your thinking here, but no! That’s the beauty of making a film about a religious topic – everyone has their own experiences with faith, and our story can be interpreted in so many ways.

I wanted to admit that Christians haven’t got it all figured out and to steal a quote from the script – “that faith is not black and white.”

You wrote the script and your husband James directed. How was that? Did he suggest changes and if so did you get your own back by directing his directing on-set?

In the development process, James is my sounding board, which is hugely beneficial because he knows the story and the direction we need to take it in, but allows me to drive the project.

Having a director read over your work each day and give critical feedback is a dream; it keeps me on track and saves me going down indulgent tangents!

On set I definitely got my own back! It was a five-day shoot with twelve main actors and seventeen crew, so James had his work cut out for him and I was able to quietly give actors notes, without him noticing!

Do you see you and James as a continuous writer/director partnership or a one-off?

James and I have a unique creative relationship, and of course I would love to keep working with him on all my scripts. Having said that, I’ve been working with another producer recently developing TV series’ and that has been a positive experience, so I’m not against working with other directors.

When you’re writing a script do you focus on one at a time or have a few screenplays on the go?

Although I have many screenplays in the mix, when I am writing, I try to keep my head in just the one story. When I start jumping between ideas, I lose too much time getting my head back into the story.

Check out my interview with The 12 director James Whitehill now.