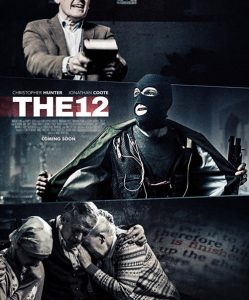 Astonishingly The 12 was made in five days – yes I said FIVE DAYS – which is less time than it takes me to decide what to watch on Netflix.

A bleakly witty church invasion thriller, it’s a refreshing take on the fallibility of religious faith, and an epistle to the strength of the families we build for ourselves, in all their robustly messy, snippy glory.

Caleb (Christopher Hunter), the human bomb hostage-taker who bursts into the little church, is surprised at the small congregation – it turns out most are away helping a refugee camp – though nowadays that would be a reasonable total for an Anglican country church.

I grew up in the Church of England, a religious institution that was in the past mostly staffed by fourth sons of the gentry who had no fortune and no titles, and quite possibly no belief in god.

But Hope Harvest is not a traditional church. It heals through prayer, with a diverse congregation, and yes they are believers. They’re not perfect though, and when Caleb arrives shouting about their failings (“where’s the rest of you? Why is no one here? Answer me!” he rages) I assumed he was meant to represent Jesus admonishing his 12 disciples. Though he’s so furious, maybe he’s more the Old Testament angry God rather than the “you’ve let me down, you’ve let yourselves down…” reproachful Last Supper Jesus of liberal consensus.

But no, Caleb’s anger is directed firmly at Pastor Mike, who has apparently done something so bad he’s forced to learn a pre-written apology and recite it on camera, to be posted online for the world to see.

This is clearly Caleb’s first attempt at potential suicide bombing; he’s jittery and hugely out of his depth from the moment he appears. “How do you know my name” he questions Dollie accusingly. “I saw it on your duffle bag” she replies carefully, so as not to encourage him to blow himself up in self-reproach. He’s stunned there’s no wifi when he’s only an hour outside the city, a sweet expectation which will have my fellow country bumpkins chortling into their packets of Spangles.

In fact he’s a broken madman for our age: his scream that “I want an apology Mike, I want repentance!” reminds me of one of those wounded social media shouters who briefly trends then turns out to have six followers. Caleb is dealing with a personal gut-wrenching trauma in the only way we know now: finding someone to blame, and forcing a worthless apology from them.

His many final warnings to his wayward prisoners reminds me of my parenting, and gradually, like my children, the 12 gain the upper hand. The temptation is to wonder why they don’t just overpower him – or wound him with a particularly barbed comment, they’re all experts at those – but ultimately he’s got a huge gun, and more dangling wires under his anorak than a 70s fuse box.

The 12 are a mixed bunch. Andie (Georgina Jane) is slightly teenage goth and I wondered why she was there, but it turns out her dad is Pastor Mike (no offence to any religious teen goths out there who go to church every Sunday of their own volition. I was religious myself in my youth, after reading the Book of Revelation at 14. I then spent several years lying about my age to get into nightclubs on a Saturday before praying away the hangover in a pew the next morning). Her boyfriend Hank (Kevin Manteaw) is the lovely faithful type that mums like me adore; sadly for Hank, Andie isn’t a mum, or like me.

Tom (Philip Ridout) and Vera (Susan Piper) are there with their thoughtful teenage granddaughter, Dollie (Miranda Horn), who has leukaemia. Ginger, bearded Pete (Michael J Ansley) is so irritating I’m surprised the others didn’t offer him up to Caleb as a sacrificial victim straight off.

Single mum Nikki (Kerry Rousell) is foul-mouthed and with a reputation (though let’s face it in some English villages you get a reputation if you don’t sort your recycling properly). Her two kids are delightful: Disney obsessive Belle, adorable in a frothy green tutu, and her older brother Conor (Jamie Wannell, wonderful), a dryly funny youngster with the world-weary air of someone who has to parent his parent as well as his little sister. Middle-aged Jill (Emily Swain) is in thrall to an online lover; Ian (Charles Abomeli) is a lacklustre father.

Soon Caleb is teaching his apology to Pastor Mike (Jonathan Coote), rather foolishly leaving the others alone together; but Caleb isn’t the only one with scores to settle and instead of forming a plan utilising everyone’s skills, they bicker.

My motto when it comes to jokes is never apologise and never explain the punchline, so I enjoyed the withering put-downs and bitchiness (“no one cares if you die” declares Nikki to the judgemental Jill). And everyone is so realistically human you could make a complete dinner service out of their feet of clay.

Self-proclaimed dad Ian finally calls his children, leaving a goodbye message that starts “It’s your dad… Ian…”. And when Mike genuinely admits his sins – calling himself “a complete pussy” – daughter Andie is having none of it: “Please stop saying that, it’s so disturbing”.

Much as I loved the humour, in places it dissipates the tension, leaving an uncertain mix of deadpan wit and menace. The best black humour comes out of fear or disaster, though on occasion here it hampers the thriller element rather than providing us with a breathing space.

Coote is terrific as Mike. His monologues sound genuine and not at all (apologies for the pun) preachy. Miranda Horn is genuinely moving – her very unwell Dollie manages to help others without turning into a sentimental stereotype. I wasn’t completely convinced when Caleb starts to lose control; it’s when hostage-takers unravel that they are their most unpredictable and most dangerous, even if they have started to connect with their victims, and I didn’t sense that threat. There’s also the odd story thread left hanging.

But the movie still has much to recommend it, and marks the husband and wife team of director James and scriptwriter Jessica Whitehill out as a couple to watch. If there is a god, The 12 should find a large and appreciative audience.

Check out my interviews with The 12‘s director James Whitehill and screenwriter Jessica Whitehill.

Watch the trailer for The 12: