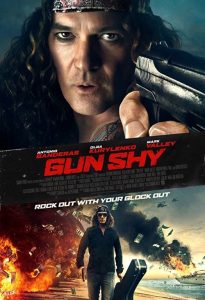 Film director Simon West’s latest movie, Gun Shy, was released on iTunes this week. The British filmmaker has a big roster of titles to his name, from The Mechanic to The Expendables 2 and (of course!) the iconic Nicolas Cage-starrer Con Air.

Gun Shy, staring Antonio Banderas as a retired rock star whose supermodel wife is kidnapped by socially aware Chilean pirates, is an action comedy also starring Death of Stalin’s Olga Kurylenko and our own David Mitchell.

1, What drew you to Gun Shy? Did you read the book first or did they approach you? And I have to ask, have you ever been in a band?

I read the book about 9 years ago and approached the writer Mark Haskell Smith to buy the film rights. I told him I wanted to make it outside the studio system and for a low budget so that I could get it made quickly and without interference. Mark liked this idea and agreed to give the film rights in exchange for a bottle of Tequila!

I was in a band at school playing the drums and I still own a drum kit. I also shot many music videos in my early career.

2, What was it like working with Antonio Banderas? (He’ll always be Zorro to me but I am pretty old).

Antonio was great fun to work with.  From living in LA for so many years he knew quite a few rock stars and based his character on some of these well known people, Stephen Tyler in particular.

Antonio was very inventive and playful in his interpretation of Turk Henry the rock star in Gun Shy. We both decided that the common denominator for a lot of these musicians was that they were quite child like and helpless. Also rather selfish and demanding. Antonio embraced this idea and twisted his performance into that of a hilarious bumbling man/child.

3, I’ve seen your film described as “the world’s first equity crowdfunded Hollywood movie”. I’ve previously chatted to indie directors who’ve used crowdfunding to raise budgets in the thousands, but never someone with a blockbuster track record like yours. What made you take this route and how has it panned out compared to traditional financing? Do you think it’ll become a popular route to finance for mid-budget films?

I wanted to make this film with the least amount of interference creatively and have the most control over the whole project. Primarily to speed up the process which can become bogged down when a lot of groups are involved in a film.

Also in the independent movie finance world the money one raises for the budget is denuded considerably by interest payments and fees. Therefore a large part of the money never gets onto the screen. The beauty of crowdfunding is that almost all the money raised goes directly into the production budget and on to the screen.

4, I read that Gun Shy’s original title was Salty, the same as the book it’s based on. I’m always interested to know how movie title changes come about – is that kind of decision up to you? 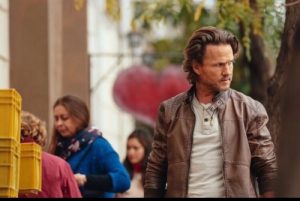 Mark Haskell Smith has written many books and he always gives them titles that don’t really have much connection to the stories with in the books. It’s a great motif and they are very memorable.  However for the film version  I wanted to give the audience a little more insight into the main character’s personality.

All through production everyone tried to come up with a new title and finally we settled on Gun Shy. It gave a hint to the crazy action sequences but also to the inexperience and terror of Antonio’s character in this world.

5, Is there any actor or actress you’d really like to work with but you’re just waiting for the right story?

There are so many great actors and actresses I would love to work with but I know I will never make enough films to fit them all in. Also many of the greats I would have loved to have worked with have sadly passed away.

6, I just watched the hugely enjoyable Con Air, one of those films I’ve previously seen a lot of, but only in bits and pieces and in the wrong order. As a director how does it make you feel when people hark back to earlier films? (I’d probably get annoyed if every time I wrote a new review someone told me they loved something I wrote ages ago, though of course that’s not stopping me asking you about Con Air, right now.) 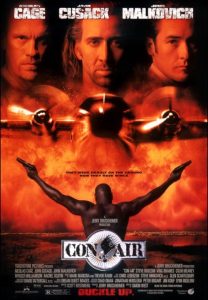 I have great nostalgia for Con Air as it was my first film. Also the producer Jerry Bruckheimer gave me total creative freedom, remarkable considering my lack of experience at that time. Therefore the film turned out very much how I wanted it to be. It is also rare to have that freedom but also to be given such enormous resources to execute your ideas.

It did have the atmosphere of a quirky independent film during production, but with the giant studio machine to back it up in the final release.  It’s a cliché to say but your films are a bit like your children so I don’t mind talking about any of them.

7, You made the first Lara Croft movie 17 years ago. The reboot is coming out this year and though it’s apparently based more on the original video game, do you feel protective at all over characters and stories you’ve worked on in the past? Or can you move on easily from projects?

I am quite protective of my characters but I also think I can always have done better. I would seriously like to reshoot every movie I have ever made with the exception of the odd scene that I think was well done. Reboots have been quite successful recently with the odd exception so I am looking forward to the new Lara Croft.

8, As someone working in the film industry do you still manage to get out to the cinema much? If so what was your favourite film from last year?

I do have trouble getting time to go to the movies these days but when I do it completely reawakens my love for film.  My favourite film of last year was Dunkirk. I thought it harked back to the great war films of the sixties and seventies.

No speeches, no false heroics, sparse dialogue and a great deconstructed narrative. Also “The Shape of Water” my favourite genre stylishly executed.

9, Last year one of the big debates on social media (particularly Film Twitter) was over cinema vs Netflix/Amazon/etc, and whether directors talking about how they want their films to be viewed was elitist or not. What’s your view? (Mine is: love the cinema experience, but cinema tickets and babysitters are expensive).

I think there is room for both viewing styles. The new platforms are supporting, at the moment, a whole alternative stream of filmed drama which perhaps would have not made for the big screen.

There will always be a desire to see some films in a movie theatre setting but I do think it will become more of a rarity.

Thanks to Simon West for answering my questions. Check out my Gun Shy review – the movie is now available for download on on iTunes. You can read my review of Con Air here.