You are here: Home / Interviews / Not lost in translation – director Barnabás Tóth on his Oscar-shortlisted short “Chuchotage” 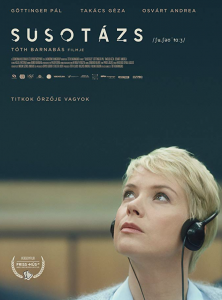 The short film Chuchotage lets us glimpse a world I haven’t seen before on film, that of on-the-spot interpreting. It’s a buoyant comedy, with terrific central performances from Géza Takács and Pál Göttinger as two bored translators stuck in the interpreting booth at a European white goods conference.

Shortlisted for this year’s live action short film Oscar, it sadly didn’t make the final cut – but if you get a chance to see it, do as it’s well worth a watch.

I spoke to Chuchotage director Barnabás Tóth about making his film, and that Oscar excitement. Check out our interview below and read my review / watch the trailer here.

Sarah: Watching Chuchotage I thought your setting was so true to life – I remember going to boring conferences and just being desperate for them to stop speaking so we could all get to the food and chat. Have you been to a lot of them in any previous jobs (I can’t imagine film conferences are dull – or are they?)

Barnabás Tóth: Film conferences can be boring as well, I can assure you! Not only have I been to many conferences in my life (I am also a member of an improv comedy group called Momentán and we often play on big events like conferences), but I even did a conference interpreting job once and it was a nightmare.

Fortunately, only a gentleman from Luxembourg was listening to my French channel. At the end of the day I excused myself, I was so poor. That was 20 years ago – then last year, when I saw a call for a short film script contest, I applied with this idea and won a small budget to produce it with Laokoon Filmgroup.

I loved the shot where you pan round across all the booths and one out of each interpreting pair is doing something else, like putting on make-up. Chuchotage, especially at an industry conference, looks to be a mixture of extreme difficulty (the job) and boredom (the event). Did you speak to translators and interpreters before you wrote it?

Thanks for your compliment! That shot was so hard to do because of the reflections on the window.

Back to the question: I did speak to several interpreters after I finished the first draft of the script. I even Skyped with interpreters from the EU Parliament. But what was really useful was when a nice lady from Hungary let me in their booth for two hours during a real conference. I recorded every little detail on my “inside” camera.

Your two stars, Géza Takács and Pál Göttinger, really spark off each other from the moment András (Takács) walks into the interpreting both with his breakfast, much to Pál’s (Göttinger) annoyance. Had you worked with them before?

With Pál, yes. And what’s funny is that he played an interpreter in my previous short as well (Operation Stone). We know each other from the improv theatre. Géza is a friend and colleague of Pál. We didn’t meet before, but due to their close relationship, their couple worked perfectly on screen.

Chuchotage has been successful at film festivals around the world. I first saw it last year when I was a judge on the Fisheye Film Festival here in the UK (it won several awards with us). Are festivals becoming the only way to get short films out there to an audience?

At the first phase of their career, yes, I think so. It needs those laurels in the beginning to get a good sales agent, a good PR publicist etc. The problem is that “big” festivals don’t take too many comedies or story-centered films, and they very rarely recognise them with awards.

Thanks for Fisheye by the way, we were thrilled with six awards, including Best Make Up! That’s a crucial job and again they get recognised so rarely.

What do you think it is about the film that has resonated with people so much?

It’s a love story in a way and that’s always very captivating. Especially if the audience can identify themselves with the characters – the key is credibility and subtle acting.

The title of the conference in Chuchotage is “Environment-effectological mechanisms of ammonia-based condensers”. I have to ask you whether you made that up or whether it’s a real thing!

I made it up! In my mind it’s not the title of the whole conference, its just one chapter the interpreter picked from the table of contents, or time schedule or something.

The film’s focus is on Pál and András and their bumbling attempts at getting the woman to notice them, but they are trying to make her listen to them rather than the conference she’s there for, and András is particularly very intrusive. What would you say to someone coming at it from that angle?

I already had it. Two or three women (under pseudonyms) accused me on social media of treating a subject of sexual harassment as being funny. I can only say: it is fiction, it is not a documentary, it is light-hearted, the evil male characters get what they deserve at the end.

Honestly, I can’t see any sexual harassment on screen here. But of course I imagine it’s not easy for the accusers either so I don’t make fun of them at all.

You just never have to answer them otherwise the conversation will NEVER end.

I loved how Pál and András are so deftly drawn, and so quickly. We know who these men are and they have very different characters. Is it difficult moving from writing a short to a feature film screenplay, where you have longer to build characters? Or do you like that variety? 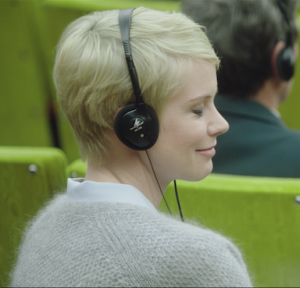 I love it, of course. I love writing characters, dialogues and I love to see it when other filmmakers do it perfectly.

I don’t think it’s harder to write shorts. Of course it’s not easier either. If it’s a comedy, and there are two equal protagonists, they have to be very different.

I think it’s a classic rule – I did not want to change it.

Congratulations on your shortlisting – the final 10 – for the live action short film Oscar, out of 140 films initially submitted. How did you feel when you heard?

My big surprise was spoiled by an Academy member who contacted me two days before the announcement of the shortlist! She didn’t communicate a result, she just expressed her enthusiasm. Later on, she forecast a 100% nomination, which, since yesterday, I know was a mistake.

Do you have any plans for your next film?

I’m full of projects: shorts, long ones, even a TV series. Various genres from comedy to historical drama, a personal love story to a socio-critic zombie film.

I can’t wait to show them to producers and start developing them together.