You are here: Home / Interviews / Toy Story 4: cast & director interviews – and watch them recording in character! 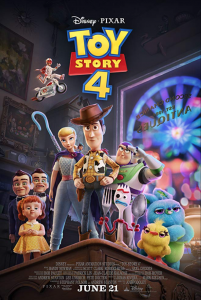 Creepy ventriloquist’s dummies. An evil baby doll.  A toy that thinks he’s trash. A stuntman who can’t do stunts. Cuddlies joined together forever (literally). Yes, I think my kids’ Christmas lists are all sorted now.

Watch these interviews with the director and cast, talking about their characters and the incredible artistry involved in the making of Toy Story 4 – plus footage of them recording their parts, and the recording of the soundtrack. (And don’t forget to check out  films clips featuring Duke Caboom, Gabby Gabby and Ducky & Bunny.)

Tom Hanks (Woody) on Toy Story 4, and its characters old and new:

“It ends up being just as profound, and new, as the previous movies were.”

“He’s a daredevil, a stuntman… he’s very brave. He’s got a lot of heart. He has a sensitivity to him.”

“The journey that she’s been on has really made her wise and strong.”

Keegan-Michael Key (Ducky) on Bunny & Ducky, two toys waiting to be won at a carnival:

“They bicker like an old couple. But they have deep affection for each other.”

Christina Hendricks on Gabby Gabby, the villain of Toy Story 4 who has never had a working voicebox so has never been loved by a child:

“She notices quite quickly that Woody might have something she desires…”

“It’s a tremendously illuminating plot. I just love where they’re going with this.”

Tony Hale on Forky, who doesn’t want to be a toy – he’s a spork who belongs in the soup and then the trash:

“This story begins where Toy Story 3 ended. The toys have been given to Bonnie from Andy.”

You can also see the last trailer here, the previous trailer here. Toy Story 4 is released in the UK and USA on 21 June.