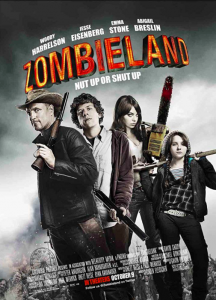 Yet despite the millions of fast-running, virus-ridden, blood-drooling zombies, a few uninfected are managing to scythe out a space for the remnants of humanity amid the death and destruction.

We only meet four survivors, though there is footage of a nun winning Zombie Kill Of The Week by dropping a grand piano on its head so I think we can assume (a) that Columbus, Tallahassee, Wichita and Little Rock are not entirely alone, and (b) that there is indeed a god.

If you haven’t seen Zombieland, which came out a decade ago and was, until World War Z, the USA’s biggest-grossing zombie film, then I’m afraid I am going to spoiler it.

Come on, there’s a sequel out any day now, so one look at the Zombieland: Double Tap cast list shows who survived (EVERYONE! I’m not sure about Sister Cynthia Knickerbocker, the piano-wielding zombie killer, but the Lord works in mysterious ways so maybe she’ll pop up again, perhaps sucking an unsuspecting zombie into her euphonium).

So no moaning about key plot points, unless you’re literally undead and can’t help it. In the words of the great Tallahassee, it’s time to nut up or shut up.

This is a film about four wary individuals finding out what it means to be a family, but luckily they do it while killing zombies with panache and glee (as well as Bill Murray, but really you have to allow for a few missteps after the end of the world).

Nerdy Columbus (Jesse Eisenberg) has an ever-growing list of rules that keep him alive, as befits someone with a lot of phobias (and IBS, which necessitates lots of toilet trips which in turn necessitate rule #3: Beware Of Bathrooms).

Rule #1 is Cardio (if you can’t run fast you die) with Rule #2 the Double Tap – never assume one whack or bullet to a zombie’s head is enough. Columbus adds more as he learns how to outrun zombies, outlive survivors, and outwit zombies and survivors, and it’s another near-death experience that leads to Rule #31, Check The Back Seat.

Meeting Tallahassee (Woody Harrelson) on a freeway, the two men decide to team up for a while at least, though it’s a feature of the new world order that no one likes to get too attached.

It’s in a supermarket on a Twinkie hunt that they’re conned by sisters Wichita (Emma Stone) and 12 year old Little Rock (Abigail Breslin). They’ve been scamming their way for years, scratching to survive, and this post-apocalypse is just an extension of their previous existence.

The girls are heading for the Pacific Playland amusement park in California, as they’ve heard it’s zombie-free, and with Columbus gradually falling for the stony Wichita the four head there together.

Those names are places that have significance for the character. Columbus is trying to get back to his Ohio hometown to see if his parents are alive, Tallahassee is travelling there. The significance of Little Rock and Wichita, towns hundreds of miles apart, isn’t explained even though the two girls are sisters (they say they are, anyway).

For a film aimed at an audience soaked in noughties pop culture – It feels video game-like, with only four characters, avatar-like names and those on-screen rules – this holds up remarkably well. That’s partly because our love of zombies is undiminished, and partly because the script and performances are so sharp and witty.

The zombies are disgusting, black blood gurgling out of their mouths. It’s a world dotted with remnants of the disaster though in a stylised way, and it all looks quite tidy (I liked the plane split in half across a motorway, fitting neatly between crashed 4x4s).

And while a lot of the time the four survivors are faced with just the odd zombie, when the infected do appear en masse they’re impressive – and fast. Once the girls get to the amusement park and start lighting up the rides, hordes of zombies take notice and are soon swarming toward them.

The deaths are equally impressive. Watching Harrelson’s gun-slinging avenger locking himself in a gift shop in the park and then methodically shooting through the grilles at the zombies swarming over the little yellow metal cabin is delicious fun – while inverting the common zombie movie trope of a character, often a man, sacrificing themselves for the greater good by causing a diversion.

Tallahassee may be warming to the idea of friendship and strength in numbers, and even being a hero, but he still doesn’t seem ready to deliberately die for anyone.

Heading to Pacific Playland, they end up at the LA mansion of Bill Mullet, I mean Murray, who’s been wandering freely round town (he’s just back from a round of golf) in a terrible wig by pretending to be a zombie pretending to be a 1980s English footballer.

His luxurious home includes several portraits of himself around the place, including one Andy Warhol classic and another of him atop a horse in a cossack hat. For superfan Tallahassee, who greets the actor with “six people left in the world and one of them Bill fucking Murray!”, it’s a dream come true. For a little while anyway. After he persuades Murray to zombie-stagger into the home cinema where Columbus and Little Rock are watching Ghostbusters, Columbus shoots the actor dead.

He may be dead but what a way to go. Quite simply it’s the best cameo I’ve ever seen, and I’m including David Beckham in Guy Ritchie’s King Arthur: Legend Of The Sword in this. (That’s not damning with faint praise. I actually liked King Arthur.)

Watch the trailers for the sequel Zombieland: Double Tap.